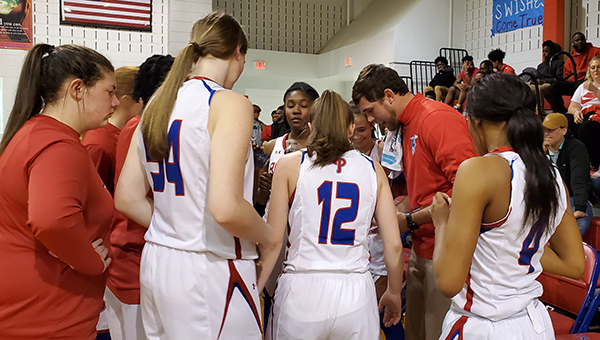 Pine coach Jaron Edwards discusses strategy with his team during a timeout Thursday. Pine defeated Port Allen, 34-33, at home and will now face Amite in the next round of the Class 2A playoffs.

Pine’s Alyssa Phelps made the go-ahead bucket, helping the Lady Raiders capture a 34-33 overtime victory over No. 21-seeded Port Allen in the bi-district round of the Class 2A playoffs in front of a packed gym Thursday evening.

No. 12-seeded Pine trailed 33-32 in the final minute of the four-minute overtime period. Phelps got the ball in the right corner, drove toward the bucket, hit the shot and got fouled to put her team up 34-33 with 50.2 seconds left. She missed the free throw, but her field goal gave her team the lead.

“I just knew she (the defender) was coming at me and I had to drive around her. I knew we were down by (one), so I just shot it and hoped it would go in,” Phelps said.

Nobody was able to put up points after that and Pine moved on to the regional round to play fifth-seeded Amite on the road.

Thursday’s game was close throughout, as neither team led by more than five points at any time during the contest.

Pine broke a 5-5 tie at the 2:03 mark of the first quarter when Phelps hit a 3-pointer. After she made a steal in the backcourt, Phelps was fouled on a 3-pointer attempt and made two of her three shots from the free-throw line to make it 10-5 through one quarter. Pine was up 14-12 at halftime.

The second half was back and forth throughout, as the biggest lead by either team was three.

Port Allen went in front 33-30 when Lyrie Nelson grabbed an offensive rebound, got the bucket, got fouled and hit the and-one with 1:50 on the clock.

Kiyasha Clark also got an offensive board, the bucket and was fouled with 90 seconds left. She missed the free throw, but her field goal had Pine within a point.

Nearly 40 seconds later, Phelps hit what turned out to be the winning shot in the one-point victory.

“I told them that hustle and blocking out on defense was going to win us the game and they came out and did that,” Pine coach Jaron Edwards said. “Had a few defensive rebounds get away from us. Their players were bigger than us, so we had to make sure that we blocked out well tonight to get that ‘W.’”

Ginn put up four, while Diamond Dawson and Haleigh Temples recorded two each.