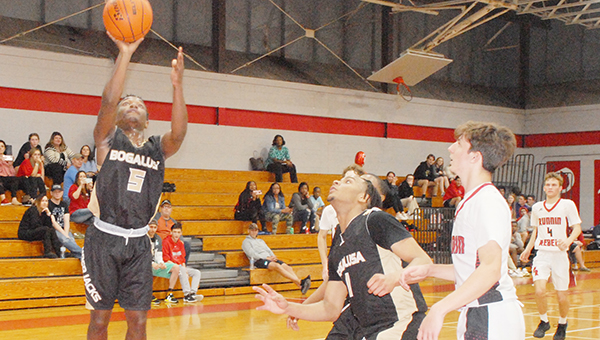 The Lumberjacks had a couple of chances to tie or take the lead late, but the attempts were unsuccessful in the four-point loss.

“The kids were faced with a little bit of adversity today and it was something they had to try to overcome,” Bogalusa coach Randall Ginn said. “We were missing one starter tonight and I think they were sitting around pouting and didn’t play well early. Luckily for me, I’ve got a great staff and coach (Carlos) Howard said a few things in the locker room that got the kids focused and they came out and played hard in the second half.

Bogalusa got off to a good start in the second half.

It began with Karry Conerly hitting a jumper on the first possession. Chance Turner grabbed an offensive rebound and made the putback, trimming the deficit to 32-30 at the 7:25 mark. Sincere Kraft tied the game at 32-32 with a field goal. Bogalusa took a 34-32 lead when Turner drove to the bucket for a layup.

Pearl River called timeout and retied the contest at 34-34 on Jody Dimaggio’s layup.

Dimaggio converted a three-point play with 1:59 on the clock. Scott Todd was good on a shot after an offensive rebound to make it 47-41. Kraft made a shot after an offensive rebound for Bogalusa with 1:07 left, but Caleb Dreux made two free throws and Maurice Gillum hit a putback shot over the final 45.6 seconds. Bogalusa trailed 51-43 after three quarters.

Pearl River went up 11 at the start of the fourth quarter when Dreux hit a 3-pointer.

Bogalusa made a run late, trimming the lead to a single point at 60-59 with 55 seconds to go, but were unable to complete the comeback on the way to the four-point loss.

Turner led Bogalusa with 18 points. He made a 3-pointer.

Josh Taylor and Kraft posted nine each, while Conerly had eight, Jarvis Dawson tallied seven, Daylon Jackson put up four and Tony Harris and Raheem Roberts had two each. Taylor and Kraft made a 3-pointer each.

Dreux led Pearl River with 27 points. He made a 3-pointer.

Todd recorded 15 that included a 3-pointer.

Isaiah Rushing and Gillum tallied four each and Austin Wadsworth had three. Wadsworth made a 3-pointer.