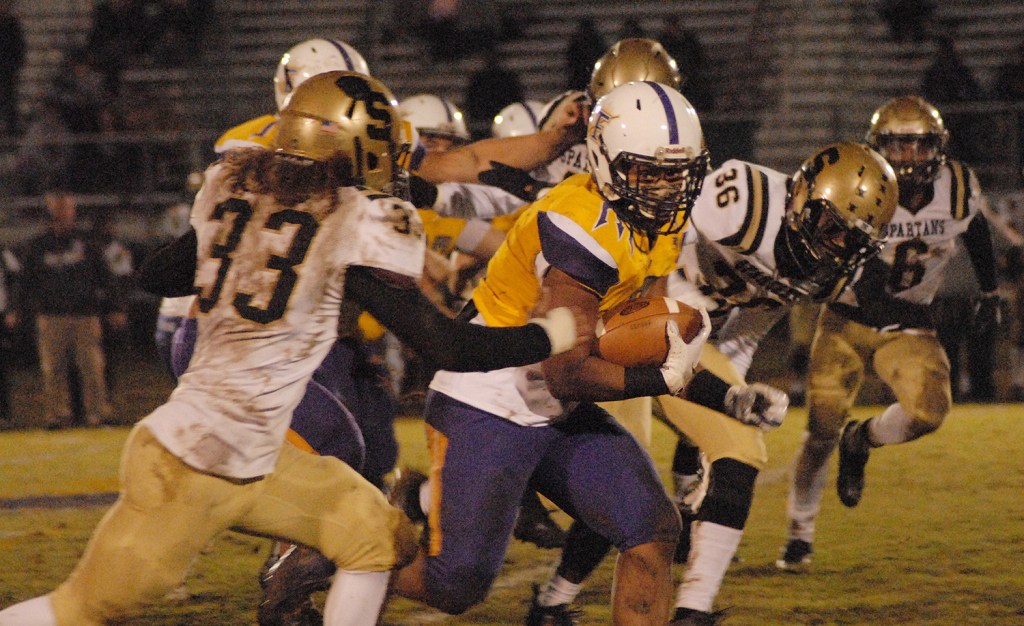 Seven Franklinton football players made first-team all-district in the 9-4A league this season.
Running back Mike Martin, wide receiver Caleb Brown, fullback Spencer Lambert, offensive linemen Joe Magee, linebacker Malachi Martin, defensive back Corinthious Dickerson and kicker Keaton Catrett.
This year, Mike Martin ran for a team-leading 1,015 yards and 22 touchdowns. He also caught 10 passes for 127 yards and two scores.
All of stats are from the regular season.
Brown led the Demons’ receivers with 36 catches for 627 yards and four touchdowns.
Lambert, who is mainly a blocking fullback, had four carries for 27 yards and three receptions for 48 yards and a touchdown.
Malachi Martin made 42 tackles, with seven for a loss, three sacks, he intercepted a pass and he recovered a fumble.
Dickerson made 47 stops, he picked off three passes, defended five, caused a fumble and he recovered a fumble.
Cattret made 27 of his 31 extra-point attempts and went 1-for-2 in field goals.
Franklinton’s second-team players are offensive linemen Alex Kennedy and Zach Brumfield, quarterback Jasper LaSalle, wide receiver Kadarious Mark, running back Quaran Warren, linebackers Chase Sheridan, Deerail Kemp and Noah Breland, defensive backs Avant Monnie and Lamar Gray and defensive linemen Ben Bickham and Jacob Turnage.
LaSalle threw for 1,419 yards with nine touchdowns and nine interceptions. LaSalle also ran for 210 yards and two touchdowns.
Mark caught 22 passes for 434 yards.
Warren ran for 279 yards and three touchdowns. Warren also made 13 receptions for 74 yards and a touchdown.
Sheridan made 38 tackles, 12 for loss with three sacks and he recovered two fumbles.
Kemp made 48 stops, two for loss with a sack, a forced fumble and a fumble recovery.
Breland tallied made 54 tackles, five behind the line, a sack and two fumble recoveries.
Monnie had 19 tackles, he made five interceptions, defended four passes and recovered a fumble.
Gray recorded 17 tackles with one for loss.
Bickham made 45 tackles with 13 for loss, three sacks, a pass defended and he caused a fumble.
Turnage posted 31 tackles, six behind the line, three sacks, he forced a fumble and recovered one.
This season, Franklinton was the No. 14 team in the playoffs, but lost to No. 19 and second-round team George Washington Carver, 34-23, in the first round of the postseason.
This year’s Defensive Most Valuable Player is Zack Bernard, as teammate Christian Westcott is the Offensive Most Valuable Player and their coach Craig Jones is the district’s Coach of the Year. Westcott is a first-team all-district quarterback and defensive lineman. Bernard is first-team defensive lineman and tight end.
This season, Lakeshore was the top-seeded team, but lost to No. 20 and state runner up Warren Easton, 64-55, in the state semifinals.
Continuing with the rest of the first-team, beginning with defense besides Westcott and Bernard, the linemen are Pearl River’s Nick Schmiderer and Salmen’s Darian Bowman.
Besides Martinm the rest of the first-team linebackers are Lakeshore teammates Devin Weilbaecher and Pearl River’s Roy Smith.
Besides Dickerson, the rest of the defensive backs are Lakeshore teammates Cullan Ziegler and Brendan Perry and Pearl River’s Hayden DeJean. Ziegler is also a first-team athlete. Perry is also a first-team returner.
The defensive flex players are Lakeshore’s Max Lowery and Salmen’s Carol Jones. Lowery is also a first-team running back.
Switching to offense, the linemen besides Magee are Lakeshore teammates Carter Smith, Cayden Guzzardo and Matthew Wray along with Pearl River’s Mason Erickson.
Besides Martin and Lowery, the running backs are Pearl River’s Corey Warren and Salmen’s Mikell Marco.
The rest of the receivers besides Brown are Lakeshore teammates Spencer Jordan and Jake Smiroldo and Pearl River’s Brayden Bond. Bond is also a second-team punter.
There is one more specialist besides Catrett and Perry in Salmen punter Tristian Pugmire.
Moving onto the second team, the line besides Bickham and Turnage includes Lakeshore’s Scott Scalia, Pearl River’s Maurice Gillum and Salmen’s Tyren Casnave.
Besides Sheridan and Kemp, the rest of the linebackers are Lakeshore’s Miles Stanchec, Salmen’s Carl Jones and Pearl River’s Kaleb Matthews. Stantec is also a second-team running back.
The defensive backs besides Monnie and Gray are Lakeshore’s Ryan DeGruy, Salmen teammates Edwin Pierce and Marcel White and Pearl River’s Nick Livingston.
Moving to offense, the line besides Kennedy and Brumfield includes Lakeshore’s Connor Rich, Pearl River’s Wyatt Hanson and Salmen’s Payton Gabel.
One more running back is on the team besides Warren and Stanchec in Salmen’s Karl Owens.
Besides Mark, the receivers are Lakeshore’s B.J. Foster, Salmen’s Jaylan Scott and Pearl River’s Isaiah Rushing.
The right end is Pearl River’s Samuel Gentry.
Besides Bond, the rest of the specialists include Salmen returner Issac Casnave and Pearl River kicker Tyler Speihler.
Pearl River and Salmen both reached the playoffs.
Pearl River was the 16th-seeded team and lost to No. 17 and second-round team Leesville, 47-21.
Salmen was 28th and was defeated by fifth-seeded and quarterfinalist Carencro, 41-7.