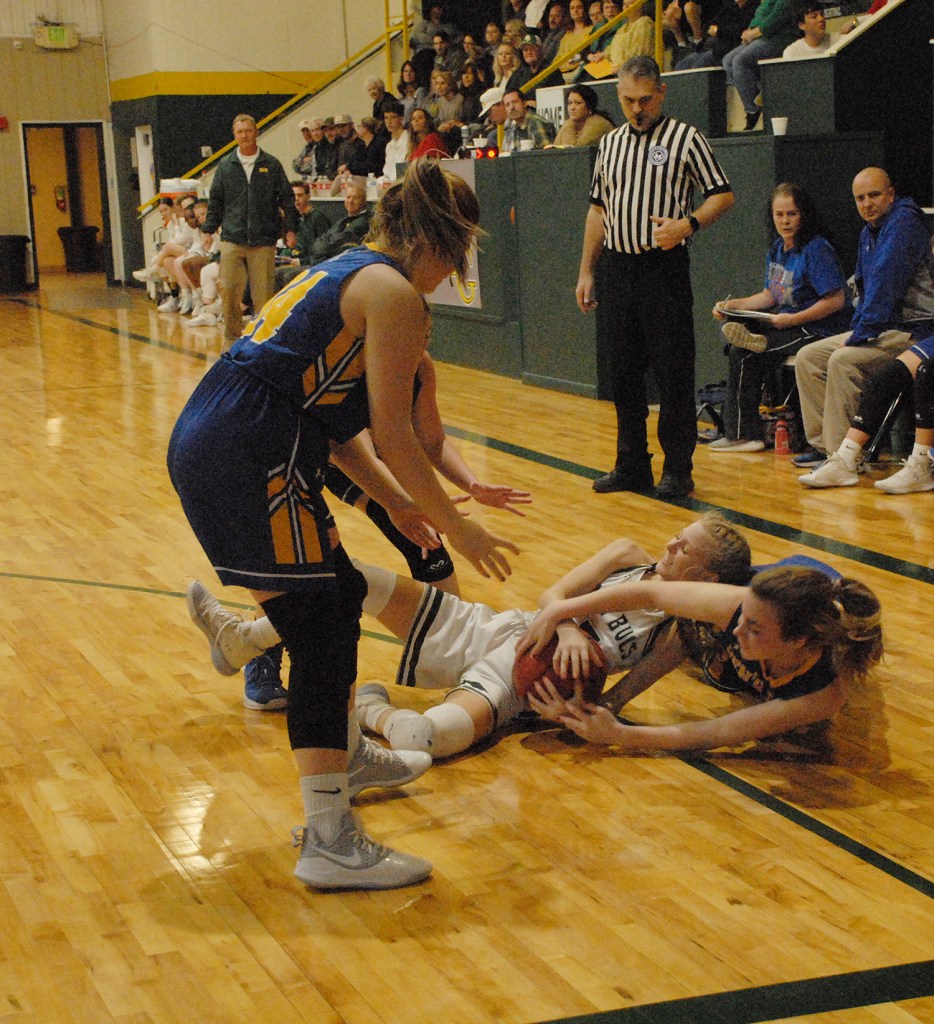 Bowling Green School’s Lady Buccaneers led by 17 at halftime and then essentially sealed away the game with a third-quarter run in a 54-26 win over Ben’s Ford Christian School at home Tuesday.
The Lady Buccaneers had a 26-9 lead at halftime and then outscored Ben’s Ford 19-9 to take a 45-18 lead through three quarters.
Ben’s Ford began the second half on an 8-1 run before Bowling Green got its offense going.
The run began with a pair of free throws by Dani Descant. Alaina McClelland made a 3-pointer, pulling the Lady Eagles within 12 with 7:09 left. Bowling Green’s Macey Jones split from the free-throw line for a 27-14 lead before McClelland was good once again from beyond the 3-point line. It was 27-17 with 6:33 on the clock.
Bowling Green’s Hope Crowe answered with a 3-pointer of her own, making it a 13-point game once again.
Crowe’s 3-pointer started an 18-1 run for the Lady Buccaneers to end the period.
Allie McCain hit a 3-pointer to make it 33-17. Ben’s Ford’s Kelci Freeman hit 1-of-2 from the free-throw line. Then field goals by Crowe and Jones had the Lady Buccaneers up 37-18 with 3:32 left. KaKa Seal hit a shot, got fouled and completed the three-point play for a 40-18 lead with 2:36 on the clock. McCain hit a 3-pointer from the right corner and then Allie Schilling made a steal in the backcourt and hit the layup with five seconds remaining in the third quarter.
“Execution. That’s been our problem the last three or four games,” Bowling Green coach Barry Seal said. “We’ve had opportunities, but we haven’t made opportunities count. I know it’s there because I’m watching it on film after games and we finally came out in the quarter and executed the plays and sets that we should.”
Bowling Green’s lead never went below 20 points in the fourth quarter, as the Lady Buccaneers went on to the 54-26 win.
Jones led the Lady Buccaneers with 12 points. She tallied six rebounds, two assists, a steal and four blocks.
Kyley Seals had seven points, six rebounds, four assists and a pair of steals.
Seal posted seven points, two rebounds, three assists and she made six steals.
McCain logged six points, eight rebounds, two assists and a steal. She made a pair of 3-pointers.
Lacie Penton scored five points and grabbed a rebound. She made a 3-pointer.
Crowe finished with five points, a rebound and five steals. She made a 3-pointer.
Schilling had four points, three rebounds and two steals.
Bridget Devall posted four points and a rebound.
Emily Cothern recorded two points, a rebound and a steal.
Merci Ray tallied two points, five rebounds, an assist and a steal.
Anna Claire Crowe pulled down two rebounds, dished out two assists and made four steals, while Peyton Dupey had an assist and a steal.
Descant and McClelland topped Ben’s Ford in scoring, with eight points each. Descant had three rebounds, an assist and a block. McClelland had two rebounds and a block.
Freeman finished with five points, six rebounds, an assist, three steals and a block.
Bailey Stewart had two points, four rebounds and five steals.
Kimberly Stogner recorded two points and two rebounds.
Lindsey McGehee tallied one point, three rebounds and a steal.
Allie Jacobs pulled down five rebounds and made a steal, while Breanna Jones had two rebounds.
Bowling Green will be back in action on Saturday, Jan. 11, with a home game against Wayne Academy. Ben’s Ford’s next game will take place Tuesday on the road against Lamar Christian School.