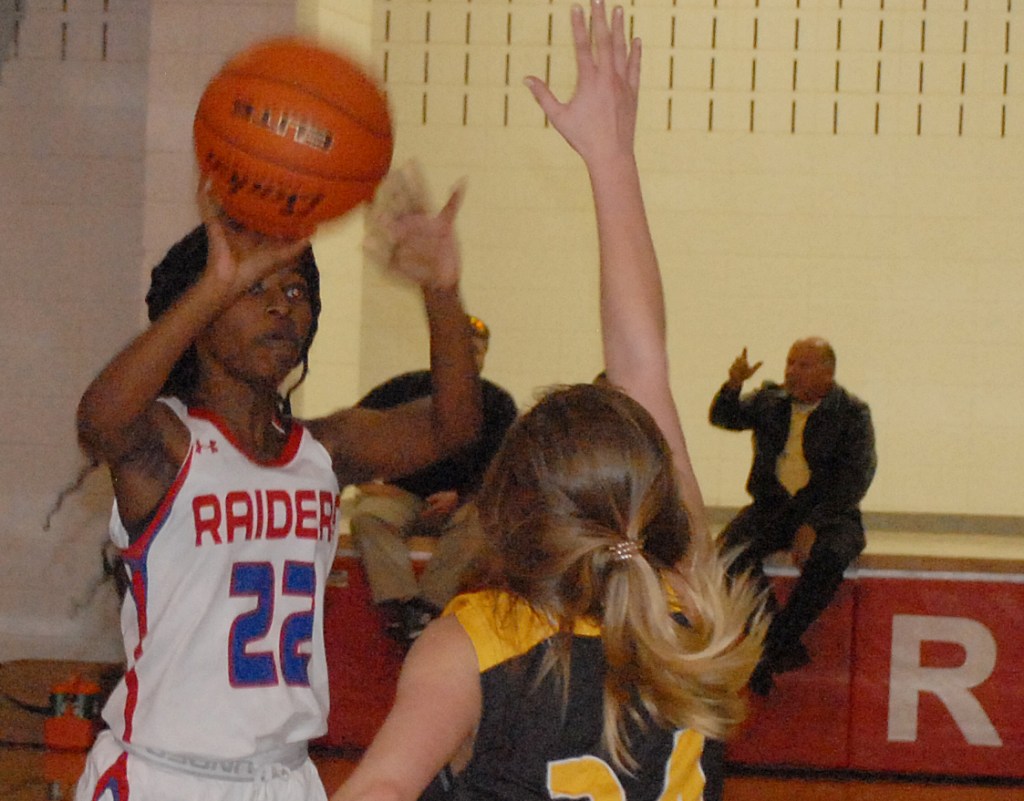 DAILY NEWS PHOTO/Chris Kinkaid Pine’s Diamond Dawson takes a shot during the title game of the Washington Parish Tournament at Pine. The Lady Raiders won the title with a 30-9 victory over Mt. Hermon School.

Pine captured the Washington Parish Basketball Tournament after a 30-9 victory over Mt. Hermon on Dec. 20 at Pine.
“I knew going in that we have a great group of girls here. It took a little while for them to buy in, but now they’re buying into the coaching philosophy and the things that we have for them to believe in,” Pine coach Jaron Edwards said. “I’ve been very excited about the group I’ve got. They’re doing really well. It feels good that the Pine girls are back on top in the parish again.”
The Lady Raiders’ defense was strong throughout. They forced turnovers that turned into easy buckets.
The defense held Mt. Hermon without a field goal until the 7:06 mark of the second quarter.
“Going into the year, I knew our defense was going to be stronger than our offense and we really rely on defense a lot to get us started with turnovers at the defensive end and scoring some easy layups on the offensive end,” Edwards said. “We’ve been doing that really well. When we’re able to press teams, that really helps us a lot by scoring easy layups when we’re able to make our layups.
“That’s the one thing we’re having a hard time doing right now. We had a pretty good game the last two games of making our layups then tonight (Dec. 20), I wanna say it was the test this week with midterms and all, that’s why we couldn’t make our layups.
“We weren’t in the gym as much as we wanted, but proud of the defensive effort because defense is what wins you championships, so very proud of our effort on defense.”
Pine jumped out to a 12-1 lead through one quarter.
Raina Crosby opened the scoring with two free throws 51 seconds into the game. Kiyasha Clark pulled down an offensive rebound and hit the putback to make it 4-0. Mt. Hermon’s Sydnei Tullos split from the charity stripe, trimming the lead to 4-1 with 5:10 left.
The Lady Raiders closed the period with the final eight points.
Clark made 1-of-2 from the line after pulling down an offensive board. Diamond Dawson hit a 3-pointer to make it 8-1 at the 1:47 mark. Crosby was good for two and K.K. Ginn recorded a steal, got fouled and hit both free throws with 2.2 seconds left.
It was 12-1 after one period.
Mt. Hermon trimmed the lead to 12-3 on Tullos’ bucket early in the second quarter, but Pine put the lead back to double figures when Crosby hit a layup at the 5:06 mark and the Lady Raiders maintained a double-digit lead for the rest of the game. Pine led 19-5 at halftime and held Mt. Hermon without a point in the third quarter and led 26-5 through three before going on to the 30-9 win.
Crosby led the team with 11 points.
Alyssa Phelps tallied six points, while Clark had four, Dawson posted three and Madison Morgan, Ginn and Sara Lyons all had two. Dawson made a 3-pointer.
Tullos scored five points to top Mt. Hermon.
Sikoya Jackson posted four.
Bogalusa won the third-place game with a 34-30 victory over Varnado in overtime.
Varnado led 27-21 at the 5:03 mark of the fourth quarter.
Bogalusa worked its way back and tied the game at 30-30 despite having just four players on the court for about the last 2.5 minutes because of an injury and a foul out. The player who got hurt was fine by overtime.
Bogalusa outscored Varnado, 4-0, in the three-minute extra period.
Tamirecal Peters gave the Lady Jacks a 31-30 lead with a free throw after Bogalusa won the tip off.
Peters hit a jumper with 2:17 left to extend the lead to 33-30 and Deranique Lee pretty much ended any doubt about who would win by splitting free throws with 10.9 seconds left for the 34-30 win.
Peters scored 19 points to lead Bogalusa.
Lee posted 13 that included two 3-pointers.
Mary Ladner had two, while Takyla Collins posted one.
Tamarya Bell tallied 10 points to top Varnado.
Myshawn Fox posted eight, while Myeasha Peters tallied six, Jalisa Jackson had four and Brittany Smith added two for Varnado. Fox made a 3-pointer.
On Dec. 19, Mt. Hermon defeated Bogalusa, 44-39.
Jackson scored 11 points to top the Lady Jackets.
Ansley Knight posted 10 points.
Bailey Fortenberry recorded nine points, while Macey Applegate had seven, Tullos tallied three and Katherine Quin added four. Fortenberry made a trio of 3-pointers, while Tullos had one.
Peters scored 23 points to lead Bogalusa. She made a 3-pointer.
Collins posted six, while Marih Myles tallied five, Caitlin Holloway recorded three and Ladner had two.
The day before, Pine defeated Varnado, 55-29.
Dawson posted 16 points for the Lady Raiders. She made a 3-pointer.
Crosby had eight points, while Phelps posted six, Kiyashia Clark had five, Madison Morgan and Sydney McElveen had four each and Ginn, Haley Martin, Mari Stogner, Lyons, Makia Clark and Haleigh Temples all had two.
Peters led Varnado with 12 points that included two 3-pointers.
Bell recorded eight, while Fox posted seven and Jackson added two. 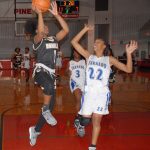