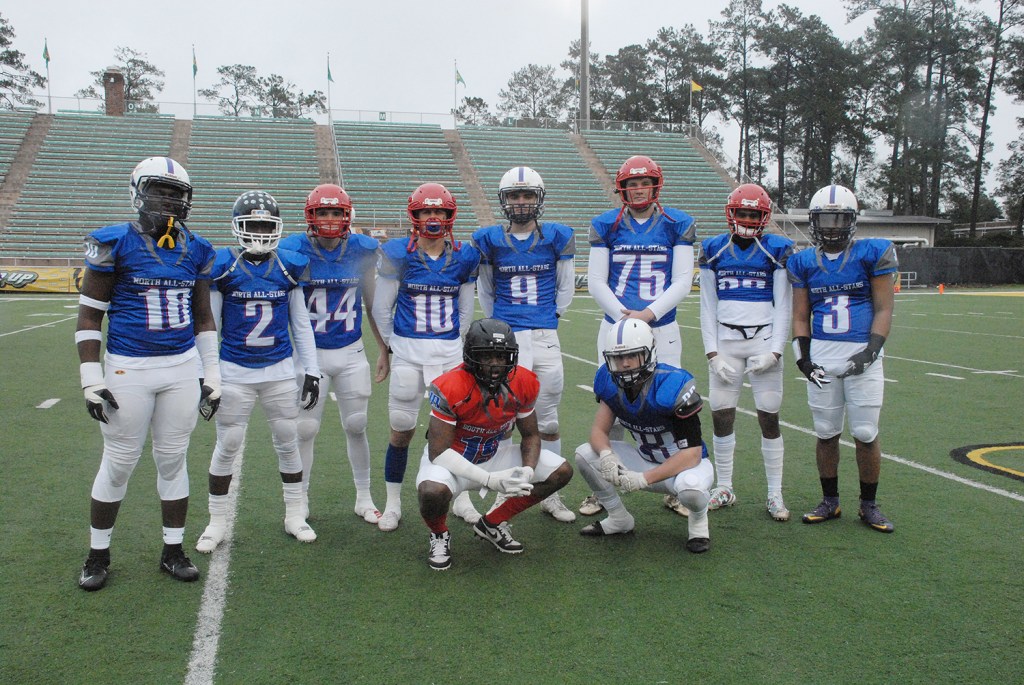 HAMMOND — Bogalusa’s Tyrese Roussell was part of the Red South’s 21-7 victory over Royal Blue and two locals forced turnovers for Royal Blue in the inaugural Children’s Hospital of New Orleans North Shore All-Star Game that took place at Strawberry Stadium on the campus of Southeastern Louisiana University on Saturday afternoon.
“It was fun,” Roussell said. “I met a lot of new people. That was good, so it just brought me out to compete with people and to be a better person like we had for meeting new coaches, players. That was good. So, hey, we had fun, we came out with the win and the Red Team won.”
The Red South Team’s head coach was Mandeville head coach and former Bowling Green assistant football coach Hutch Gonzalez.
Two of his assistants included Bogalusa head coach Adam Brumfield and former Franklinton head coach Stephen Burris, who was also the Demons defensive coordinator for 17 years prior to taking the head coaching reins.
Roussell was one of 10 players, who play for schools in Washington Parish, competing in the game.
The other nine played for Royal Blue, which was coached by Pine’s Bradley Seal.
Pine’s Drake Westmoreland and Franklinton’s Noah Breland forced a turnover each.
Westmoreland’s turnover was essentially a 14-point swing.
Red South was up 14-0 late in the third quarter and had a chance to go up three possessions, but Westmoreland changed things in a hurry.
Red South had first-and-10 from Royal Blue’s 11. Royal Blue attempted to throw, but Westmoreland intercepted the pass at his 5 and was off to the races. Westmoreland ran up the right side of the field and went 95 yards for the touchdown, trimming the lead to 14-7 after St. Paul’s School’s Will Grand was good on the extra point at the 3:28 mark.
“I really thought I was gonna get caught. There was a fast quarterback tracking me down, but I had good blockers and something happened,” Westmoreland said.
Franklinton’s Noah Breland forced a turnover when he recovered a fumble at the end of the first half.
Royal Blue punted, but the ball popped free on the return and Breland recovered it as time expired in a 7-0 contest.
“It was at the end of the first half, I just saw the ball on the ground,” Breland said. “First instinct, grab the ball, try to give our offense another chance, but we didn’t have enough time on the board.”
Locally on the offensive side, Franklinton’s Jasper LaSalle threw for 44 yards, while Pine’s Logan Temples had 16 yards passing.
The rest of the local all-stars were Franklinton teammates Mike Martin and Malachi Martin, Pine teammates Jordan Anderson and Larry Dillon and Varnado’s Korterrius Mingo.
Former Varnado coach and current Independence coach Scott Shaffett was the game’s coordinator.
The Most Valuable Players were Pearl River’s Corey Warren from the Red South Team and St. Paul’s School’s Michael Crockett from the Royal Blue Team.
Red South tallied the game’s first 14 points.
The first touchdown came when Warren scored from a yard out. Pope John Paul II’s Logan Klotz hit the extra point for a Red South 7-0 lead with 10:36 left in the first half.
It stayed that way through halftime.
Red South went up 14-0 in the third quarter when Lakeshore’s Cullan Ziegler intercepted a pass and returned it 67 yards for the touchdown. Klotz’s extra point split the uprights to make it a 14-point game.
Westmoreland’s pick-six made it 14-7.
The final touchdown came when Salmen’s Mikell Marco tallied on an 18-yard run. Klotz added the extra point for the 21-7 win. 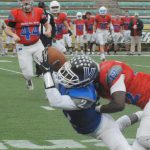 Varnado’s Korterrius Mingo catches a pass in the contest that took place at Strawberry Stadium on Southeastern Louisiana University’s campus. 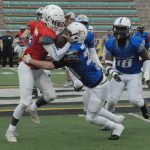