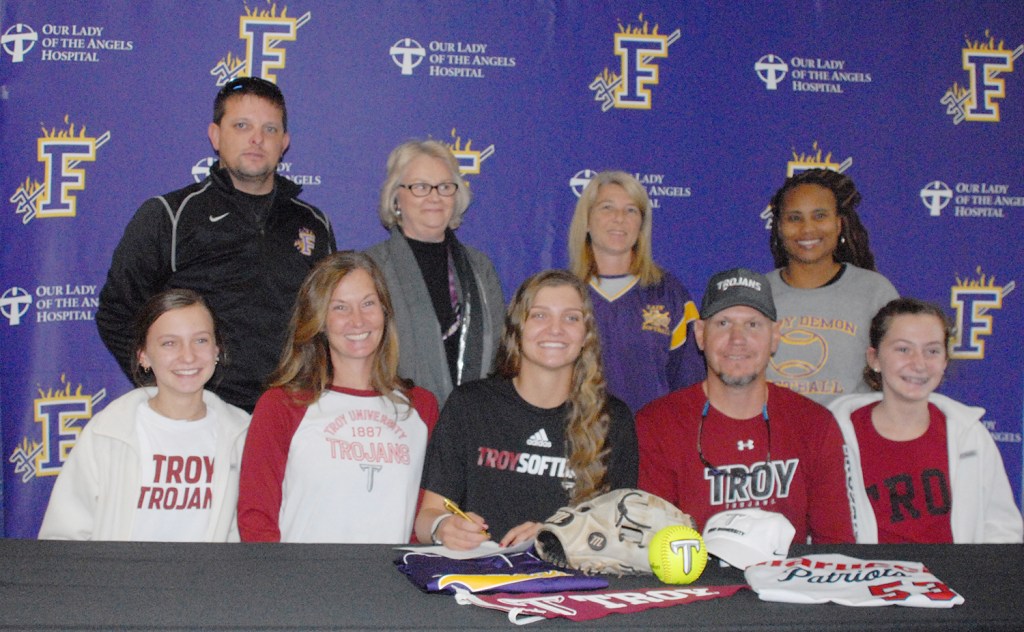 Franklinton senior Ashlan Ard has signed a National Letter of Intent to attend Troy University in Alabama and play softball for the Trojans.
“I’m so excited,” Ard said. “I’ve worked for this my whole life and it’s a dream come true. Today is a goal that I’ve worked up to since I picked up a softball, so it’s just good to see everything — all of my hard work — come to life.”
Ard had plenty of schools to choose from, but said that she knew Troy was where she wanted to go when she walked on campus.
“I walked on campus and I knew, I was like, this is where I want to go. I mean, hands down, no question. I committed the day that I visited,” Ard said.
Ard has played three sports at Franklinton. Soccer and volleyball are the others, but she will stick to just softball when she goes to Troy.
Ard has succeeded both on the field and off.
In softball, Ard hit six home runs last season to set the school record for homers in a season. Over her three years at Franklinton, she has a .445 career batting average. Ard has scored 104 runs and driven in 66. Ard has been a first-team all-district player all three years.
Ard credited many people for her success.
“I’ve put in a lot of work, my family has put in a lot of work, my coaches, so (Franklinton softball coach) coach Leslie (McGhee), (Franklinton girls soccer coach Drew) coach Brooks, I owe it all to them,” she said.
McGhee said that she didn’t know Ard before she came to Franklinton, but had heard about her from others and was told “oh, you are getting a player this year. She is going to be something.”
“As a coach, you hear that a lot from the community and fans of the sports world, so I really didn’t pay much attention to that until tryouts and then that season in January,” McGehee said. “Ashlan immediately caught my eye with her work ethic, skill level and knowledge of the game. She has continued to grow and has had much success here at Franklinton High School on and off the field.”
McGhee said that Ard’s outstanding character, leadership and mindset make her who she is today and have definitely attributed to what she has accomplished.
“As teachers and coaches, one of the highest successes that we are graded on is when a student is able to take material or skills and teach it to their peers,” she said. “Ashlan does this with ease. Her selflessness always shines, whether it be staying late after practice, coming up on weekends or just giving advice during practice to her teammates. She is an outstanding young lady and will go far.”
In the classroom, Ard has a 4.04 grade-point average and made a 25 on her ACT. She has already earned 12 credit-hours toward college.
“You can’t be an athlete without academics,” Ard said. “To be a good athlete, you have to say your priorities and my priorities are school. At the end of the day, I’m going to college to get a degree, so school is my focus.”
Ard said that she wants to teach and coach in the future.