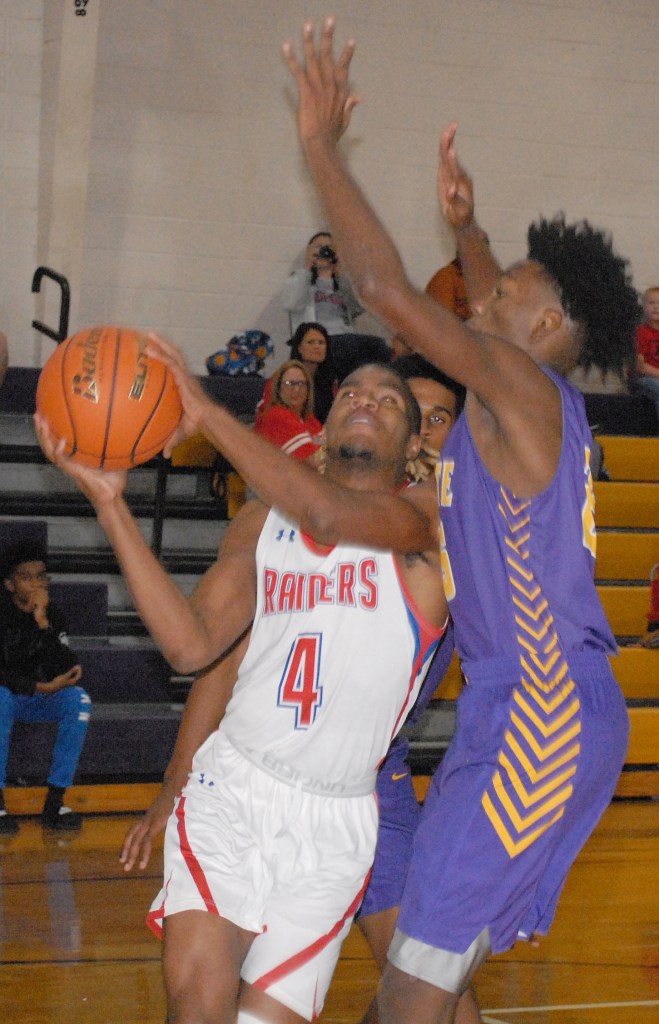 DAILY NEWS PHOTO/Chris Kinkaid Pine’s Jordan Anderson gets inside during a game at the Franklinton Tournament.

Bogalusa went 1-1 in the Franklinton High School Basketball Tournament that took place Dec. 4-7.
Bogalusa defeated Pine, but lost to Loranger.
Bogalusa won the game against Pine, 71-46.
Against Pine, Chance Turner scored a game-high 23 points that included a 3-pointer.
Javon Bickham had nine, while Josh Taylor, Jahee Roberts and Karry Conerly all posted seven, Quientay Henry tallied six, Demarcus Spikes and Raheem Roberts had four each and Tony Harris along with Shadwick Gamble added two. Taylor made a 3-pointer.
Jordan Anderson led Pine with 16 points.
Karson Voth posted 12 points and he made a pair of 3-pointers.
Tristan Jones had eight, while Marion Hart tallied five, Kazyron Warren tallied three, Adrianuen Johnson had two and Larry Williams added one.
The game against Loranger was a 47-34 loss.
Pine went 1-2.
Besides the game against Bogalusa, Pine defeated Amite, but lost to Franklinton.
In the Raiders’ 52-32 victory over Amite, Anderson topped Pine with 14 points. He made a pair of 3-pointers.
Jones, Kendall Sheridan and Johnson all posted six, while Voth and Khalil Washington recorded five each and Hart along with Williams added four for the Raiders. Jones and Sheridan made two 3-pointers each, while Voth had Washington were each good on one.
Franklinton was also 1-2.
The Demons topped Pine, but suffered setbacks to Loranger and Amite.
Franklinton lost to Loranger 80-34, but rebounded with a 63-57 win over Pine.
Cameron Stewart led the Demons with 22 points in the win over Pine. He made six 3-pointers.
Cornelius Laurant and Avant Monnie recorded 16 each. Both players made three 3-pointers each.
Keyon Nelson had five and Jaheim Jefferson put up four in the win. Nelson made a 3-pointer.
Anderson led Pine with 23 points that included a 3-pointer.
Jones and Williams posted 12 each. Jones hit two 3-pointers.
Johnson and Voth tallied three points each, while Sheridan and Hart added two each.