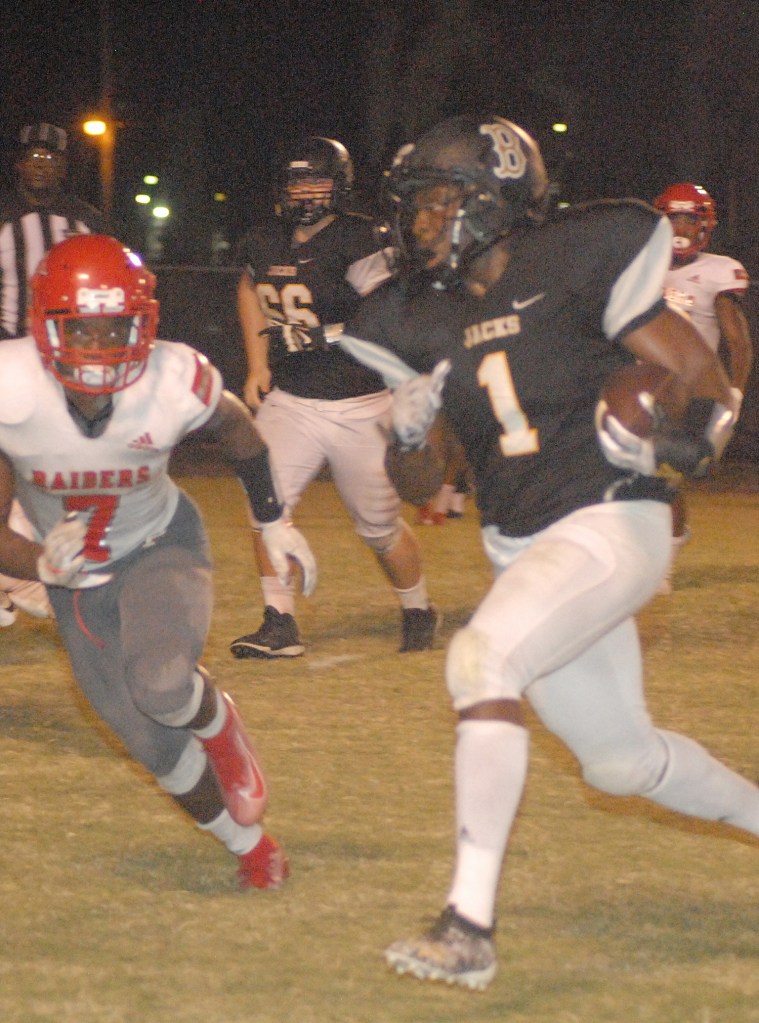 DAILY NEWS PHOTO/Chris Kinkaid Bogalusa’s Tyrese Roussell runs in the open field. He is one of nine Washington Parish players in Saturday’s All-Star Game at 2 p.m. at SLU.

The best senior football players from five parishes will be competing in one spot and Washington Parish will be represented extremely well in the Children’s Hospital of New Orleans North Shore All-Star Football Game at 2 p.m. on Saturday at Strawberry Stadium on the campus of Southeastern Louisiana University.
Nine players from Washington Parish, along with two current head coaches and three former local football coaches, will be in the game.
The local players are Bogalusa’s Tyrese Roussell; Franklinton’s Mike Martin, Jasper LaSalle and Malachi Martin; Pine’s Logan Temples, Jordan Anderson, Drake Westmoreland and Larry Williams; and Varnado’s Korterrius Mingo.
This season, Roussell was a second-team all-district athlete in District 8-3A. Roussell caught 11 passes for 222 yards and two touchdowns. He also ran for a score.
Mike Martin was a first-team all-district running back in District 9-4A after rushing for 1,015 yards and 22 touchdowns in the regular season. He also caught 10 passes for 127 yards and two scores.
LaSalle was a second-team all-district quarterback. LaSalle threw for 1,419 yards with nine touchdowns and nine interceptions. He also had 210 yards rushing and two touchdowns.
Malachi Martin was a first-team all-district linebacker. This season, he recorded 41 tackles and three sacks. He also intercepted a pass and recovered a fumble.
Temples was a second-team all-district quarterback in District 9-2A. This year, he threw for 1,006 yards with 14 touchdowns and five interceptions. Temples also ran for 467 yards and nine touchdowns.
Anderson was a first-team all-district wide receiver and punter. He made 31 catches for 549 yards and eight touchdowns. Anderson also ran for 213 yards and three scores.
Westmoreland is a first-team all-district linebacker after racking up 105 tackles and he made one interception.
Williams is a first-team all-district tight end. This year, Williams caught two touchdown passes.
Mingo is a first-team all-district running back in District 9-2A. This season, he had 1,100 all-purpose yards and scored five touchdowns.
The game features the Royal North playing against the Red South. The all-stars are from Washington, Tangipahoa, St. Tammany, St. Helena and Livingston parishes.
Roussell is playing for the Red South, while the rest of the local players are on the Royal North Team.
In addition to the players, several current and former coaches from Washington Parish are in the game as well.
Pine coach and District 9-2A Coach of the Year Bradley Seal, who led his team to the Class 2A quarterfinals, is head coach of the Royal North.
Bogalusa coach Adam Brumfield is an assistant coach for the Red South.
Mandeville coach and former Bowling Green School assistant football coach Hutch Gonzalez, who guided his team to the quarterfinals in Class 5A, is the Red South’s head coach.
One of Gonzalez’s assistants for this game is former Franklinton head coach Stephen Burris, who was a defensive coordinator for 17 years at FHS.
Former Varnado coach and current Independence coach Scott Shaffett is the game’s coordinator.
Admission to the game is $10. 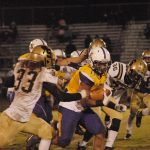 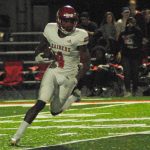 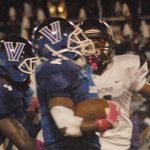 DAILY NEWS PHOTO/Chris Kinkaid
Varnado’s Korterrius Mingo runs looks to get past a defender in a game this season. Both players are in the all-star game that takes place Saturday.