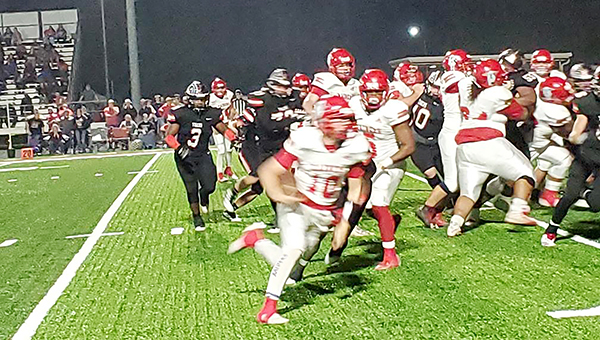 Pine’s Logan Temples rushes around the right side for the Raiders’ first touchdown Friday night. Pine’s season ended at No. 2 Many with a 49-21 loss in the Class 2A quarterfinals.

MANY — Pine’s season came to a close on Friday night with a 49-21 loss to No. 2 seed Many in the quarterfinal round of the Class 2A state playoffs.

The No. 7 seed Raiders had trouble stopping the run throughout, as Terrance Williams and Shamarion Wiseman ran for 179 and 157 yards, respectively. Williams scored five touchdowns while Wiseman had one.

“They have a helluva running game,” Pine coach Bradley Seal said. “When you show up and run the football on our defense, you’re a really, really good run game, and we couldn’t stop it.”

Pine got off to a good start.

The Raiders took advantage and scored when Logan Temples ran right and into the end zone on a 12-yard run. Colton Graves hit the extra point for a 7-0 lead with eight minutes left in the first quarter.

Many countered with a 22-play, 93-yard drive that took 11:37 off the clock. Williams capped off the possession with a 3-yard run. Trotter Lafolette made the point after to even the contest at 7-7 with 8:23 left in the second quarter.

Williams gave Many the lead with 19 seconds to go in the first half on a 1-yard run, and Lafolette’s extra point made it 14-7 at the break.

Pine opened the second half with a 64-yard scoring drive and tallied when Temples found Jordan Anderson on an 18-yard touchdown pass. The key play in the drive was Anderson’s 27-yard run off a fake punt with Pine facing fourth-and-4 at its 42.

But Many scored the next three touchdowns.

Wiseman had the first on a 30-yard run and Williams scored the next two on runs of 45 yards and 6 yards, respectively. Lafolette made the three extra points for a 35-14 lead at the 8:54 mark of the fourth quarter.

But Pine responded quickly when Adrianuen Johnson returned the ensuing kickoff 81 yards. Graves made the extra point, trimming it to 35-21 with 8:40 to go.

Many added two more scores in the fourth quarter.

Williams ran 5 yards and Reginald Mitchell picked up a Many fumble and ran about 20 yards with 35 seconds left. Lafolette made the two extra points for the 49-21 win.

This is the furthest Pine has gone in the playoffs. Pine also tied Amite and Kentwood for a share of the District 9-2A title.

“I’m extremely proud of our season,” Seal said. “All year long — there’s nothing negative to say. Our seniors, hats off to them, hats off to them. We had a nice year. We just came up short.”

Many advanced to the Class 2A semifinals. Pine finished the season with a record of 9-4.