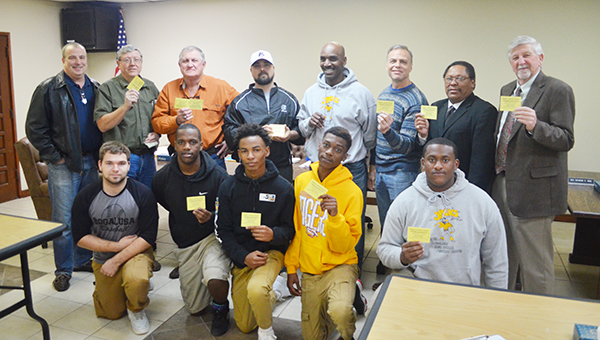 The Bogalusa School Board and various high school baseball players pose with tickets to the baseball team’s plate lunch fundraiser. Tickets can be bought at the district’s offices or from baseball players.

It was all good news at Thursday evening’s Bogalusa School Board meeting.

The meeting kicked off with the swearing-in of board president Curtis Creel and vice president Paul Kates.

After the brief ceremony, Kates went on to praise International Paper for giving some high school a tour of the paper mill facilities.

“They gave them a tour of the plant and worked with them on how to fill out an application and get a job,” he said. “International Paper has been good to our community and our kids and we want to keep them involved with our high school kids.”

Moon announced to the board that he’s working with Cummings on organizing a jambalaya plate lunch as a fundraiser for the team.

“Hopefully we’re going to raise some money for balls, bats and whatever else they need,” Moon said.

The tickets for the plate lunches are $7 each and the lunches will be available Sunday, Feb. 21.

The Family Life Center is located at 510 Ave. B.

Tickets are available at the school board office, 1705 Sullivan Drive. Tickets are also available from the baseball team players.

Following the comments and reports, the board approved its new business without comment. Business included the financial statements, the revised budget and check distribution to full-time employees.

One personnel matter was the superintendent evaluation. Creel asked for board members to return the evaluations to him within 10 days.

Later in the evening, Jason Arceneaux, a new teacher in the district, spoke to the board.

Arceneaux said he is a former marine from Morgan City who has also worked in for Shell in the oil industry.

He is teaching English for the seventh, eighth and ninth grades.

Walker also announced the district will hold a half-chicken dinner plate sale on Sunday, Feb. 28 to raise money for the district’s general fund.