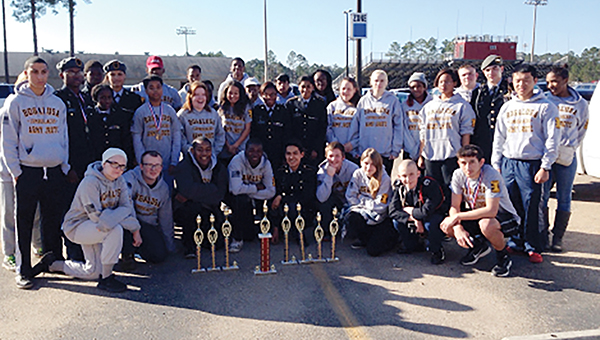 Members of the Bogalusa High School JROTC team show off their trophies after the competition at Fontainebleau High School earlier this month.

The drill team is a team of cadets who exemplify the traits of discipline, teamwork and leadership skills learned in the JROTC program. The team performs at various JROTC competitions in the state and region. When they participate in local competitions, they exhibit as much pride in their school as other varsity team sports.

The JROTC drill team is a way for the program to generate positive publicity, create interest and maintain high morale in the JROTC program. The cadets successfully perform these events with pride, honor and precision while simultaneously balancing their core class schedule and workload.

During the last event of the day, a Knock out Drill was conducted to determine the top three cadets of all schools in military facing movements and military bearing.