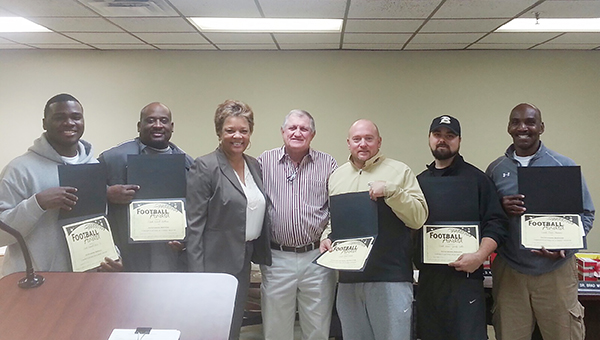 Recognition of the varsity football coaching staff for winning the District 7-3A championship and reaching the quarterfinal round of the playoffs was front and center during Thursday night’s Bogalusa City Schools System board meeting.

In his first year as BHS head coach, Dave Roberts guided the Lumberjacks to a 7-6 overall mark. The Jacks were eventually eliminated in the playoffs by Amite.

“I am so proud of my varsity football team,” Superintendent Willie “Toni” Breaux said. “You brought this community back together. It was really great. Academics are important, but the whole child is equally important.

“We needed someone who would grow the program and stay here. Coach Roberts, we’re so proud of you.”

“We commend you for your success,” board president Curtis Creel said. “Because of the success in football, the system was riding a wave of support from the community. I hadn’t seen that in a long time. I hope we can continue that success we had this year.”

In other matters, the board:

• Recognized Finance and Business Supervisor Deloris Walker and her staff for the recent sterling 2014 audit by the auditing firm of Carr Riggs & Ingram. The staff received a Certificate of Excellence and a Certificate of Achievement from the Government Finance Officer Association. Walker’s staff includes Lynn Jenkins, Cynthia August, Ottiney Self and Sherry Burton.

• Approved the district serving a partnership with Northshore Technical College-Sullivan Campus in connection with the YouthBuild Program for 2016 through 2019.

“We have done a whole lot better than our competition on the testing,” Breaux said. “We’re not where we need to be, but we’re better than we were.”

• Recognized former employee Juanita Magee with a plaque and certificate of appreciation.

• Creel and Paul Kates were re-elected president and vice president of the board, respectively.