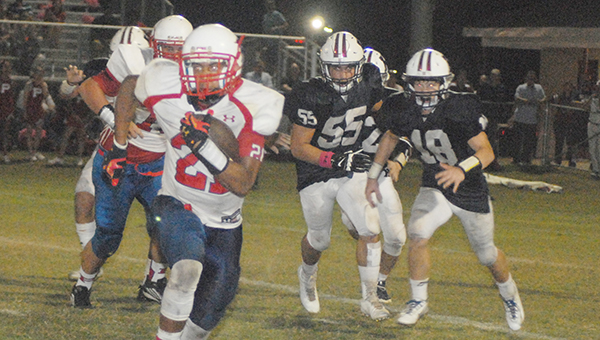 COVINGTON — Pine hung tough in Friday night’s game, but was unable to pick up its first win of 2015 in a 27-13 loss to Archbishop Hannan in a District 8-2A road game Friday.

Much of the action took place in the game’s first two minutes, 33 seconds.

The Hawks won the toss and elected to receive. Hannan drove 66 yards in seven plays and scored when Tim McDonald completed a 31-yard pass to Payton Hudson for a touchdown. Hunter Sellen was good on the extra point and Hannan led 7-0, with 9:52 remaining in the first quarter.

It didn’t take long for Pine to respond. On the ensuing kickoff, Adarrius Berry fumbled the ball at the 1, picked it up at the 3 and then took it up the left sideline all the way, 97 yards for the touchdown. The extra point was no good, keeping it a 7-6 contest.

Not to be outdone, Hannan’s Justin Wendt took the next kickoff back 68 yards for a score. The Hawks were up, 13-6, after the two-point conversion was no good.

The score stayed that way until early in the second quarter when Pine tied the game.

The Raiders drove 70 yards in seven plays while using three minutes, seven seconds. Facing second-and-8 from Hannan’s 20, quarterback Joey Seal, who rushed for 57 yards on 10 carries, ran left and up the sideline into the end zone. Colton Terrell’s extra point was perfect and the game was tied, 13-13, at the 9:42 mark of the second quarter.

The Hawks went back in front on the following drive when Joshua Butler ran it in from the 13. Sellen’s extra point was good and the Hawks led 20-13, with 7:13 on the clock.

Neither team was able to score again until early in the fourth period. Hannan made it a two-score contest on a 1-yard run up the middle by Ryan Hensarling. The score was set up by a 43-yard pass, as McDonald connected with Wendt. Sellen was good once again on the extra point to reflect the 27-13 final.

Pine had a chance to draw closer on the following drive, but turned the ball over on downs on fourth-and-goal from the 7 with 7:29 remaining.

“We’re taking it one game at a time,” Pine coach Bradley Seal said. “Our guys are playing hard, they’re fighting. We’ve got to get ready for Springfield. One game at a time.”

The game against Springfield is the Raiders’ next game. It takes place at home Friday.

Berry led Pine in rushing with 64 yards. Delvric Dillon, who left with a shoulder injury in the second quarter, finished with 51 yards on four carries.

Seal threw for 91 yards. Kaz Warren had two catches for 68 yards. Lowell Pittman caught a pass for 12 yards and Chris Gordon finished with a reception for 11 yards.