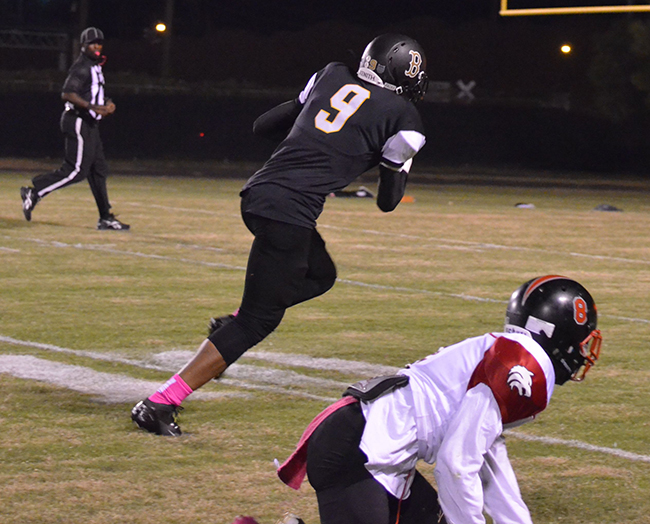 DAILY NEWS PHOTO/Justin Schuver Tramarcus Levi catches a pass and goes into the end zone for a touchdown in Friday's home game against Loranger.

Bogalusa stayed close throughout most of Friday night’s game against visiting Loranger, before eventually falling by a 34-28 score.

The teams were tied 14-14 at halftime and the Lumberjacks trailed 21-14 after three quarters.

Bogalusa (1-4) had a chance to tie the game again with 10:14 left in the fourth quarter, after quarterback Tymothy Toussaint scored on a 15-yard run. The Lumberjacks’ regular kicker, Sean Forbes, was injured in the third quarter and not available, and Bogalusa’s backup failed to connect on the extra point.

The miss kept the Lumberjacks behind, 21-20.

“That hurt not having Sean to kick our extra points,” said Bogalusa coach David Roberts, who said Forbes should be okay to play in the Lumberjacks’ next game. “He’s also a great offensive player for us, and when he went out it limited what we were able to do.”

Loranger (2-3) added 13 points in the fourth quarter to move in front, 34-20, before the Lumberjacks scored a touchdown at the buzzer and added the two-point conversion.

“(Toussaint) is a very good player and kept them in the game,” Loranger coach Sam Messina said. “He can run the ball, but he also gets rid of it quick and made some strong passes.”

Loranger led 7-0 with 9:11 left in the first quarter, on a 7-yard touchdown run by Evan Johnson. All six plays in the 63-yard scoring drive were runs.

“They run the option and it can be hard to prepare for,” Roberts said. “Very few teams run the ball that much nowadays, so it can take some adjusting.”

Bogalusa answered with a scoring drive of its own, when Toussaint converted fourth-and-goal from the Loranger 1-yard line with 3:13 remaining in the quarter. 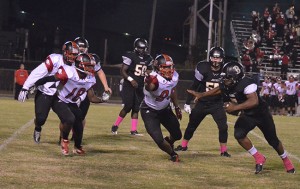 DAILY NEWS PHOTO/Justin Schuver
Bogalusa’s Tymothy Toussaint runs left and takes it 15 yards for the touchdown in a game held Friday against Loranger at home.

It took the Wolves just two plays to move back in front, as D.J. Hookfin broke away for a 49-yard touchdown run with 2:07 left in the first quarter. The extra point put Loranger ahead, 14-7.

Bogalusa tied the game with 7:28 left in the second quarter, when Toussaint completed a 43-yard touchdown reception to Tramarcus Levi, and Forbes added the extra point.

“Tym did another good job of running our offense,” Roberts said. “We were able to take what the defense was giving us.”

The Wolves’ fourth-quarter touchdowns were a 1-yard run by Johnson and a 10-yard run by Hookfin. The Hookfin run increased Loranger’s lead to 34-20 with just 37 seconds left in the game.

The Lumberjacks kept fighting. After the kickoff went out of bounds, Toussaint completed a 15-yard pass to Darnell Harris for a first down. He then passed to Levi for 21 more yards.

Two penalties on the next play moved the Lumberjacks down to the Loranger 7-yard line. Two plays later, Toussaint scored from 7 yards out, with 0:00 showing on the scoreboard. The Lumberjacks went for two and made it, again with Toussaint adding the points on a run.

“I’m proud of the guys for going down there and scoring at the end,” Roberts said. “I knew that they would keep fighting.”