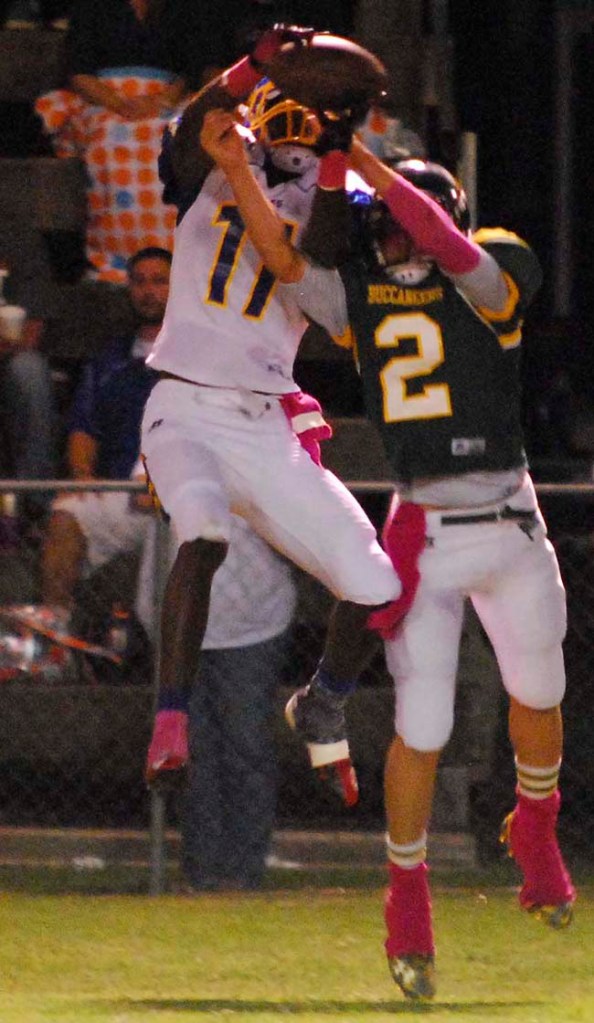 Bowling Green hosted Ben’s Ford on Friday in what has become their annual rivalry face off, with the Buccaneers taking a 34-14 victory.

Bowling Green went into the game on a three-game winning streak and a 5–1 record for the season. Ben’s Ford was trying to overcome a tough season and three consecutive losses.

The Eagles won the toss and chose to receive. Daniel Pittman led the Eagles in a 14-play drive down the field but were halted by the Buccaneers’ defense at the Buccaneers’ own 45 yard-line. The Buccaneers had the ball but quickly lost it when Jordan Barnes fumbled during a quarterback keep.

The ball was recovered by Pittman for the Eagles. The Eagles tried again to make a drive down the field but the Buccaneers’ defense held firm, which forced the Eagles to punt. Bowling Green’s Brandon McEvleen blocked the punt and the Buccaneers took possession of the ball at their own 47 yard-line.

The Buccaneers in their second drive attempt downfield had two big handoffs from Barnes to Cameron Cowart. The first got the Buccaneers to the Eagles 13 yard-line and the second got them on the board with the first touchdown of the game. Hayden Thompson attempted the extra point but it went wide, which put the score at 6-0. Back in possession of the ball, Pittman attempted a pass to fellow Eagle Cory Caldwell, but it was intercepted by Thompson. Barnes and the Buccaneers were able to capitalize on the turnover with a four-play drive to the end zone. Barnes scored the touchdown with a quarterback keeper from the Eagle 6 yard-line. Barnes then passed to Matt Pierce for the two-point conversion, which brought the score to 14-0. 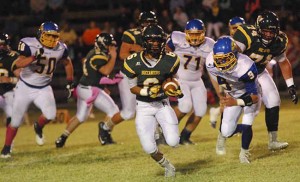 At the end of the first quarter, the Eagles were able to rally their offense and got on the board with a touchdown pass from Pittman to Dionte Fernandez. Pittman ran for the two-point conversion to cut the Buccaneers’ lead to 14-8 after one quarter.

In the second quarter, Barnes made a series of handoffs to Cowart, which brought the Buccaneers halfway down the field.

Barnes passed to Hunter Mulkey at the Buccaneers’ own 42 yard-line. Mulkey was able to breakaway take the ball all way down for the first touchdown of the second quarter. Thompson kicked the extra point and bought the score to 21-8.

The Buccaneers weren’t finished. After a quick Eagles possession, Bowling Green was able to push another long drive starting at their own 13 yard-line all way the way down field. Jace Ball stepped up and with a hand off to Cowart, put another touchdown on the board for the Buccaneers. Thompson kicked the extra point and moved the score to 28-8 at the end of the first half.

Bowling Green managed to break the stand off at the beginning of the fourth quarter. Thompson and Cowart switched off roles as quarterback and pushed the Buccaneers down field. Thompson handed off to Cowart at the Eagles 2-yard line, and he pushed through for the touchdown. Thompson attempted the extra point but it was wide and the score went to 34-8.

With five minutes left on the clock, Pittman and Fernandez led an Eagle charge down field. Fernandez made a pass from the Buccaneers’ 11-yard line to Cory Caldwell in the end zone for a final touchdown. Fernandez attempted the two-point conversion with a pass to Caldwell again but was not able to connect.

Third quarter proves to be key period in Wildcats…