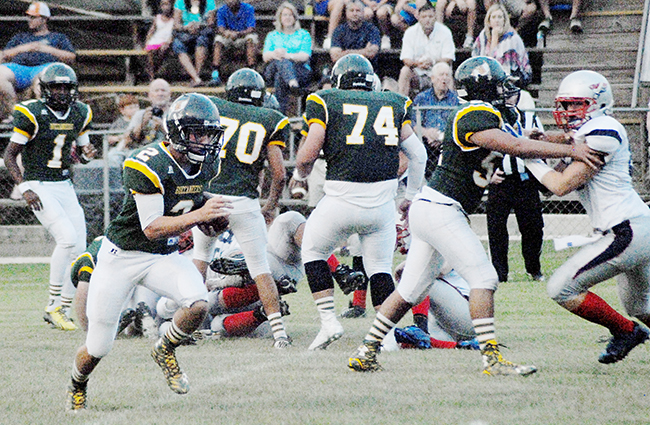 DAILY NEWS FILE PHOTO/Chris Kinkaid Bowling Green’s Jace Ball runs the ball to the right during the Bucs’ jamboree game against CHEF at Ben’s Ford earlier this season. The Bucs play on the road against Central Private tonight.

Bowling Green School begins District 5AAA play tonight, as the Buccaneers head to Central Private.
The Buccaneers, who are 3-1, enter tonight’s action after a 39-8 victory over Amite School Center.
The teams met last season, with Bowling Green winning by a 30-10 score.
Buccaneers coach David Currier said his team is looking good in practice.
“At this point, it’s about not doing anything real physical in practice,” Currier said. “It’s about preparing for the opponent.”
Currier said the defense has been playing solid the entire season and the offense is continuing to improve. He said they are also showing the Buccaneers are in decent shape because they have been playing complete games.
Currier said defensive tackles Drake Spears and Brandon McElveen have been playing well for his team.
Last week, McElveen made seven tackles while Spears finished with seven tackles and a sack.
“It all starts up front,” Currier said. “We’ve got two physical guys at defensive tackle. They’re both good size and very physical. In a 4-4 defense, they’re the first wave. Because of the D-tackles’ play, it frees up the linebackers to make plays.”
Offensively, Jordan Barnes carried the ball 12 times for 102 yards and two touchdowns. He also finished 7-of-13 passing for 99 yards.
Cameron Cowart ran 13 times for 139 yards and three touchdowns.
“(Cowart) played for us last year and did a great job,” Currier said. “He’s matured as far as his quickness and speed and he’s got strength. He gives us a breakaway threat. “He doesn’t say a lot, but he’s a great leader by example. He doesn’t any plays off.”
Several receivers had strong games last week.
Jace Ball caught two passes for 38 yards.
Jonathan Smith had two receptions for 35 yards and Jack Bickham had one catch for 23 yards.
Central Private comes into tonight with a 2-2 record.
Last week, Central Private defeated University Academy of Cenla, 23-14.
“We’re still young,” Central Private coach Joey Sanchez said. “We only play four or five seniors. Our defense is very much improved form years past, but this week, we’ll be challenged by Bowling Green’s offense, which is very very good.”
Central Private quarterback Cade Sanchez has 484 passing yards with seven touchdowns and just one interception.
Gavyn Andre is the team’s leading receiver with 12 catches for 148 yards and three touchdowns. Jude Fontenot is next with six receptions for 113 yards and two touchdowns.
Austin Slater leads the rushing attack with 27 carries for 112 yards.
Defensively, the team switched from a 4-man front last season to a 3-5 base this year because of personnel.
Central Private coach Joey Sanchez said the change allowed the team to be more aggressive.
The defense has forced nine turnovers and only one opponent has scored more than 20 points against Central Private this season.
“We’ve hung our hat on our defense this year,” Sanchez said. “They pitched a shutout in the second half of last week. This week, they are going to be challenged by Bowling Green’s speed.”