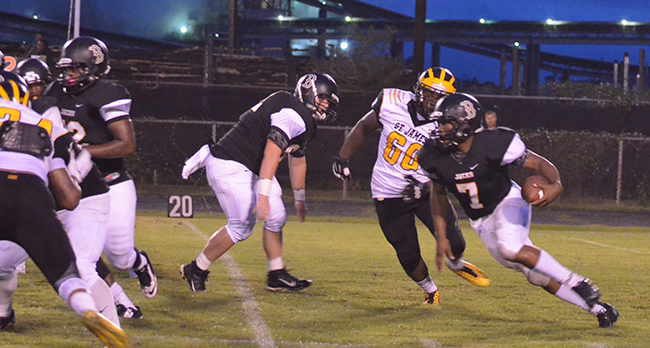 DAILY NEWS PHOTOS/Justin Schuver Bogalusa quarterback Tym Toussaint looks for running room against the St. James defense. The Lumberjacks had a chance to drive for a game-winning touchdown late, but eventually fell by the score of 20-15.

Down by 12 points in the fourth quarter, Bogalusa put together a rally and had a potential game-winning drive, before falling short to visiting St. James by a score of 20-15.

The Lumberjacks (0-2) held an 8-6 lead at the start of the fourth quarter, but the Wildcats (1-1) responded with 14 unanswered points to take the lead with 6:27 remaining. Bogalusa was held to three-and-out on its next possession, but the Lumberjacks forced a fumble four plays later to give the offense the ball again.

Bogalusa recovered the fumble on the St. James 42-yard line with 2:49 left in the fourth quarter. On the very first play, running back Sean Forbes broke away for a 41-yard run. Two plays later, quarterback Tym Toussaint scored on a 1-yard touchdown run. Toussaint also successfully ran for the two-point conversion, cutting the Wildcats’ lead to 20-15 with 2:13 left.

Forbes attempted an onside kick, and it was recovered by Bogalusa’s Tyrese Cotton on the St. James 49. The Lumberjacks were able to drive down to the St. James 26, but eventually turned the ball over on downs with 30 seconds left. St. James was then able to kneel out the clock.

“I’m glad that we kept fighting and got back into the game,” Bogalusa first-year coach David Roberts said. “Our defense did a good job of keeping us in the game, and they’ve really been playing well all year.”

The teams were scoreless in the first quarter, before the Wildcats scored the opening points in the second. St. James quarterback Demarcus Williams completed a 24-yard touchdown reception to Arron McKenney on a fourth-and-11 play. The two-point conversion was no good as the Wildcats led 6-0.

Bogalusa responded with a scoring drive of its own. A big play in the drive was a 55-yard run by Toussaint, and the drive ended when Forbes scored on a 3-yard run. Toussaint ran for the two-point conversion as Bogalusa took an 8-6 lead with 6:23 left in the second quarter.

Neither team scored in the third quarter, but St. James re-took the lead in the fourth. Williams threw a 65-yard touchdown reception to McKenney with 9:00 remaining in the game, putting the Wildcats ahead 12-8 after their failed two-point conversion.

On Bogalusa’s next drive, the Lumberjacks attempted to punt the ball away but a bad snap went over the punter’s head. He tried to recover the ball in the end zone, but fumbled it away and it was recovered by the Wildcats for a touchdown. Williams ran for the two-point conversion with 6:27 left, putting St. James ahead 20-8.

“We had a great special teams play on the onside kick recovery, but then we also had a special teams play that cost us the game, with the bad snap,” Roberts said. “We needed to just kick the ball out of the back of the endzone for a safety.”

Roberts said that his defense played well for the most part, but made two major coverage errors on McKenney’s long touchdown catches.

“Those big plays really hurt us,” he said. “If we play sound defense, they don’t happen.”

Bogalusa will travel to play Franklinton next Friday night in a rivalry game.

Varnado pulls away from Pine