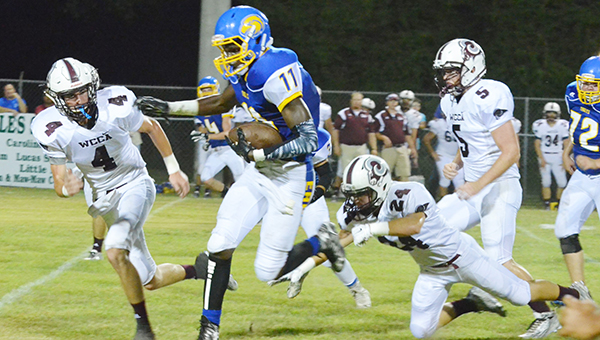 Ben’s Ford wide receiver Dionte Fernandez breaks away for one of his two touchdowns in the Eagles’ 40-34 win over Wilkinson County Christian Academy on Friday night.

With the game tied at 34-34 in the fourth quarter, Pittman completed a 60-yard touchdown pass to Corey Caldwell with 9:43 remaining to give the Eagles (1-2) the late lead. The two-point conversion was no good.

The Rams (2-1) made a drive late in the game, advancing down to the Eagles’ 1-yard-line with less than two minutes remaining. A holding penalty backed WCCA back up to the 11, and then quarterback Phillip Cutrer was sacked on the following play.

Facing third-and-goal from the 17, Cutrer completed a short pass to Hutch Holden. As Holden stretched for the endzone, the ball came free and was recovered by the Eagles with 1:24 left in the game.

Ben’s Ford was forced to take a safety with 22 seconds left, cutting the lead to 40-36. The Eagles kicked the free kick out of bounds, giving WCCA the ball on the Ben’s Ford 35. After two incomplete passes, Cutrer threw a ball that was intercepted by Pittman, who ran out of bounds at the 17 with 16 seconds remaining.

The Eagles were then able to kneel to run out the clock and earn their first win of the season.
WCCA scored first, when Kyle Folds picked up a 23-yard touchdown run and Caleb Poole ran for the two-point conversion with 8:19 left in the first quarter. However, the Eagles quickly responded, with Pittman completing a 59-yard touchdown reception to Dionte Fernandez on the next possession.

Pittman passed to Ashton Hines for the two-point conversion, tying the game at 8-8 with 6:19 left in the first.

Ben’s Ford then moved ahead with 1:02 left in the first, on a 5-yard touchdown run by Pittman. The two-point conversion attempt failed.

The Eagles increased their lead with 9:14 left in the second quarter, when Pittman found a wide open Caldwell free down the left sideline for a 79-yard touchdown reception. The two-point conversion failed, but Ben’s Ford still led 20-8.

WCCA cut into the lead, as the Eagles were ahead 20-16 at halftime.

The Rams moved in front for the first time with 7:50 left in the third quarter, on a 4-yard touchdown pass from Cutrer to Holden. The two-point conversion failed, as the Rams led 22-20. They increased their lead to 28-20 just 1:23 later when Poole returned a punt 75 yards for a touchdown.

But the Rams tied it on the next possession, with Cutrer completing a 32-yard touchdown pass to Holden. The two-point conversion failed as the teams stayed tied 34-34 heading into the fourth quarter.

With 5:32 left in the third quarter, Hines was badly injured on a helmet-to-helmet collision. An ambulance transported him to the hospital as a precaution, but before leaving he flashed a “thumbs up” to the sideline.