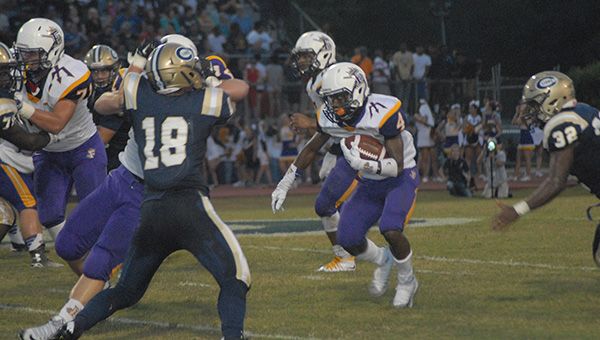 Franklinton’s Azende Magee runs through a hole while getting a good block from a teammate in Friday’s contest against Covington.

COVINGTON — Two touchdowns by Covington early in the game proved to be the difference, as Franklinton suffered a 14-6 loss in its season opener on the road Friday.

The Demons took over after the opening kickoff at their 14-yard line and moved up 5 yards on an offside penalty. Franklinton advanced the ball to the 26, but was pushed back to the 9 because of a penalty. On first down, the Demons fumbled and Adam Daix recovered for the Lions at the FHS 10.

Running back Devin Brumfield ran 7 yards to the 3 and then finished off the drive on the next play to make it a 7-0 lead after David Jenkins’ extra point with 10:11 remaining in the opening period.

After a Franklinton punt, Covington drove 13 yards to the Demons’ 25, but on third-and-14, Marquell Hollins hooked up with Alonjai Earlycutt along the left sideline for a touchdown. Jenkins hit the PAT and the Lions were up 14-0 at the 7:22 mark.

The defenses took over after that for the rest of the half and it remained, 14-0, at the break.
Franklinton coach Shane Smith said credited Covington and said his team needs to play better.

“We’ve got to take advantage of our opportunities offensively,” Smith said. “The first half, we had a mishap on a kickoff return that changed field position and then we fumbled the first drive and they go up 7-0. And then, they made basically one offensive play.

Covington received the second-half kickoff and was forced to punt. Franklinton took over at its 33 and went 67 yards in nine plays. The Demons scored when Tavion Partman took a handoff on a speed sweep on third-and-goal from the 11 and got into the end zone. The two-point conversion was no good, keeping it a 14-6 contest with 6:31 remaining in the third quarter.

Both offenses were unable to score down the stretch in the 14-6 contest.

Amite began the season with a 44-12 win over St. Helena College & Career Academy.