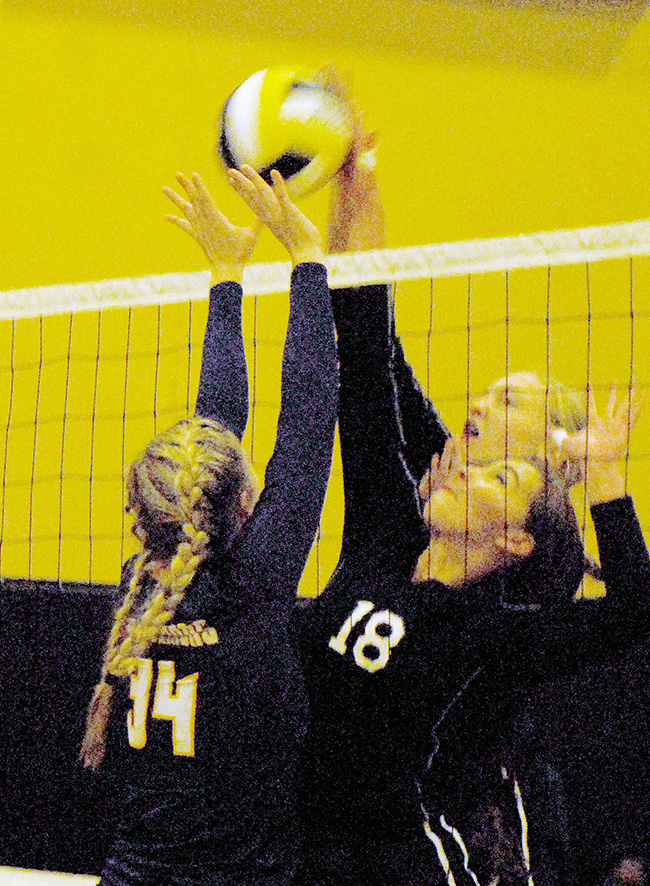 DAILY NEWS PHOTO/Chris Kinkaid Franklinton’s Katelyn Boughton battles at the net against a First Baptist Christian School player during their match at the Salmen Jamboree Thursday.

Franklinton unofficially opened its volleyball season Thursday evening at the Salmen Jamboree and went 0-3 against some tough competition.
“I thought the girls did very well in the first match against Pearl River compared to what we did last year,” Franklinton coach Leslie McGhee said. “I said previously that I’m looking for just some things that we have gotten better in since last year.”
McGhee said the Lady Demons’ footwork is better and so is their hitting, but said they need to improve on their communication.
Thursday’s matches were one game to 25.
Franklinton, which is in its third year of having volleyball, hung tough in its opening match against Pearl River early on.
The teams split the game’s first 16 points. But Pearl River broke an 8-8 tie and went on a 6-0 run to take a 14-8 lead.
Franklinton ended the run when Staci Hathcox downed a kill, trimming it to 14-9.
Pearl River, which went to the regional round of the Division III playoffs last season, tallied and then Franklinton’s Tamira Bickham recorded a kill, putting the lead back down to 5.
The Lady Rebels then posted five of the next six points for a 20-11 advantage. Kaitlyn Boughton tallied a kill and it was 20-12.
Pearl River finished the game with five in a row for the 25-20 win.
The next match was a 25-9 loss to Mandeville, which made it to the regional round of the Division I state playoffs last season.
Franklinton kept it close in the early part of the contest. Mandeville got out to a 5-2 lead.
Madison Villere scored a point for Franklinton to pull the Lady Demons within two. After Mandeville tallied to go up, 6-3, Boughton logged a kill and the margin was back to two.
But then Mandeville got going. The Lady Skippers scored four unanswered to take a 10-4 lead.
After Franklinton scored, Mandeville ran off six in a row to open up a 15-5 lead before going on to the 25-9 win.
“Mandeville, they’re dominant,” McGhee said. “It’s hard to compete with a team like that. At least the girls didn’t shut down; they kept playing.”
The final match for the Lady Demons was a 25-11 loss to First Baptist Christian School in Slidell.
The Lady Eagles, who went to the Division V quarterfinals of the state playoffs last season, scored five of the contest’s first six points.
But Franklinton came back with a run of its own. The Lady Demons went on a 4-1 run to close the gap to, 6-5.
First Baptist then responded with five in a row and had an 11-5 lead.
The Lady Demons posted two of the next three, but holding a 12-7 lead, First Baptist ran off six straight and led 18-7. The Lady Eagles went on to the 25-11 win.
Franklinton opens the regular season Sept. 1 on the road against Loranger. The home opener is set for Sept. 8 against Pearl River.
On Sept. 5, the Lady Demons are competing in the Pearl River Tournament.
The tournament features two pools, Pool A and B. Franklinton, which is competing in Pool B, faces Pearl River at 9 a.m. and Hammond at 11 a.m.
Also locally in that tournament is Pine.
The Lady Raiders, who are in Pool A, play Salmen at 9 a.m. and Springfield at 10 a.m.
First place from Pool A and second place from Pool B and first place from Pool B goes against second place from Pool A at noon.
The championship game is set for 1 p.m., as is a match up between the third place teams from each pool.