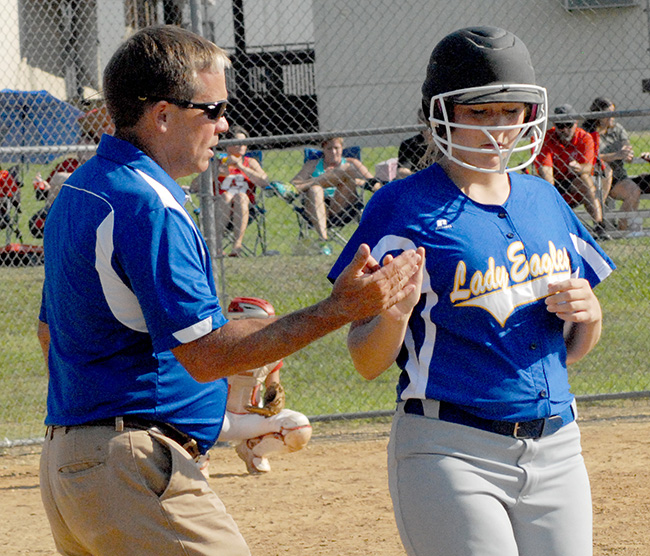 DAILY NEWS PHOTO/Chris Kinkaid Ben’s Ford Christian School’s Emily Crawford and coach Mark McGehee give each other a high five as Crawford reaches first on a walk to begin the second inning of Tuesday’s game.

Ben’s Ford Christian School’s Lady Eagles got down, 9-0, after an inning and a half, but drew closer with three in its half of the second, but ended up falling to Central Private, 21-6, in Tuesday afternoon’s district home game.
Central Private put up two runs on one hit in the first inning. Lauren Bihm walked and Sammie Hebert singled. Both ended up scoring on wild pitches.
Central Private added to its lead with seven runs in the second while sending 10 hitters to the plate. Rebecca Armanini singled to second and advanced on an error before tallying on Allison Flurry’s RBI double to left centerfield to make it 3-0. After a strikeout, Bihm belted a pitch to right centerfield. The ball dropped toward the fence. Bihm was able to go all the way around the bases and scored for the two-run inside the park homer and it was 5-0. Hebert reached on an error and went to second on a wild pitch. Ashley Schmidt reached on a miscue and Hebert alertly continued running and tallied the sixth run. Alayna Averette got on because of an error and Jillian Lavigne singled. Schmidt scored on a passed ball. Averette came in on a wild pitch and Lavigne scored on an error from the attempted throw to get Averette out at home. Central Private led 9-0.
But Ben’s Ford came back with three in its half of the second.
Emily Crawford and Katelyn McCain walked before Christen Keaton singled. Anna Bella Seal hit a ball to second. The throw home to force Crawford was in time, but the catcher then throw to first for an attempted double play. The throw was high and over the first baseman’s head. It went down the right field line. McCain and Keaton scored to make it 9-2. Chloe Barber was next and she singled home Seal, and Central Private’s lead was down to just six.
Central Private essentially put the game away with six runs in the third and four in the fourth to make it a 19-3 contest.
But the Lady Eagles kept fighting back.
Ben’s Ford added three runs in its half of the fourth. Seal and Barber singled to center and right. Callie Sprehe then sent both runners home with a two-run triple to the right centerfield gap and it was 19-5. Addison Seal plated courtesy runner Allison Forbes to make it 19-6.
Ben’s Ford coach Mark McGehee said he was proud of the way his team never quit.
“We were a little more aggressive today,” McGehee said. “The score didn’t reflect it, but we were more aggressive fielding and swinging the bat.”
Central Private added two more in the fifth and Ben’s Ford was retired in order in the 21-6 contest.
In Monday’s action, Ben’s Ford lost to Silliman Institute, 20-0, on the road.
Two hitters reached base for the Lady Eagles.
Barber singled and Anna Bella Seal walked.