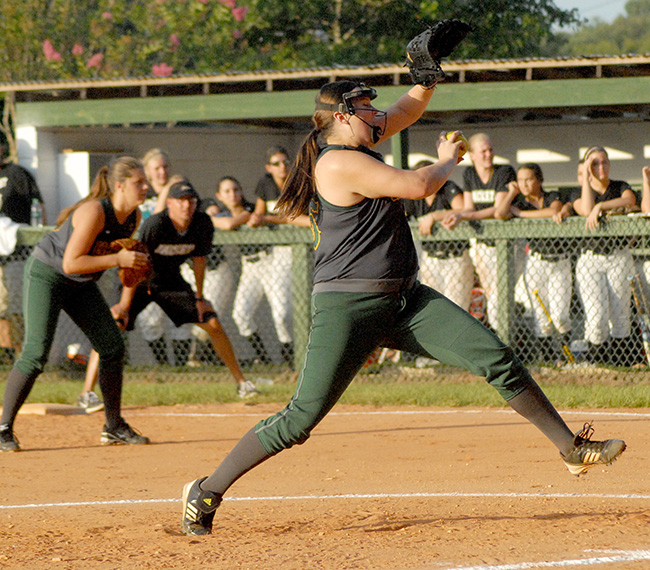 DAILY NEWS FILE PHOTO/Chris Kinkaid Bowling Green’s Cailee Fruge prepares to release a pitch in a game earlier this season at home. Fruge was the winning pitcher in a 6-4 district opening win over Central Private. Fruge threw a complete game, allowing seven hits. She struck out five and did not walk a hitter.

Bowling Green’s Lady Buccaneers were solid offensively in a 6-4 victory over Central Private in the district opener held Aug. 13 on the road.
The Lady Buccaneers recorded 12 hits in the victory.
Shelby McDonald posted three hits, including two singles and a triple. Landry Dupont, Katelin Junkins and Madison LaSalle posted two hits each.
Dupont singled, tripled and drove in two runs. Junkins posted two singles and tallied an RBI. LaSalle logged two extra-base hits, a double and a triple.
Holly Waskom posted a single and a run batted in. McKinley Seal and Mason Edwards both singled and Taylor Oalmann drove in a pair of runs for the Lady Buccaneers in the win.
Winning pitcher Cailee Fruge went the distance, allowing seven hits. She finished with five strikeouts and she did not walk anyone. Fruge threw 108 pitches.
“Getting the win in our district opener made all of the time and hard work over the summer pay off.  My girls earned this win and continue to make me proud at their dedication to our team,” Bowling Green coach Holly Breland said.
Bowling Green did not trail. The contest was scoreless through two innings.
But in the third, the Lady Buccaneers got on the board.
They tallied a run and took a 1-0 lead as the teams prepared to play the fourth inning.
The Lady Buccaneers tacked on another run in the fourth, upping their lead to 2-0.
The teams plated two-runs each in the fifth inning, as Bowling Green continued to maintain its two-run advantage at 4-2 through five.
Bowling Green extended its lead to three with a run in the sixth and seventh.
The Buccaneers were ahead 6-2 with Central Private coming up for its final at bat.
Central Private answered with two in the seventh but could get no closer.