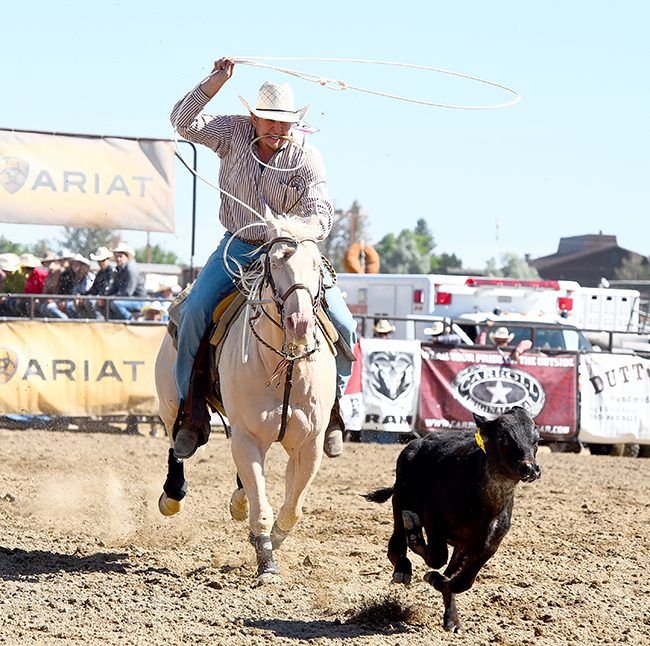 Alex Nobles finished 50th overall of the 121 competitors in the tie-down roping event at the 67th annual National High School Finals Rodeo, which took place July 12-18 in Rock Springs, Wyo.
“It was a lot of fun. I met a lot of new people. It’s definitely a once-in-a-lifetime deal,” Nobles said.
The event featured two rounds. Nobles competed July 14 and July 16. The top 20 move into the short round.
The first place combined time was 18.89, which was by Colton Kofoed of Bear River, Wyo.
Nobles, who graduated from Ben’s Ford Christian School in 2015, was successful in roping calves on both attempts.
He roped the first one in 19.18. He tallied a 23.38 on his second attempt.
He roped the calf in 13.38, but 10 seconds was added to his time because he broke the barrier.
His combined time was 42.56.
The person, who finished in 20th place, Trevor Howton of Princeton, Ky., was at 24.8.
“I didn’t really draw that good. One of my calves ran hard, and it took me a little longer to catch him. On the second one, I broke the barrier. The calf gets a head start, and if you leave early, you get 10 seconds added to your time,” Nobles said.
Nobles said his goal to roping a calf is 10 seconds, which is also his best time ever. Nobles, who competes for the Mississippi High School Rodeo Team, made it to nationals by finishing in the top four.
Participants earn points based on where they finish in the competitions.
Their points carry over to the finals. The finals feature five rounds. The top 10 participants after four rounds of the finals advance to the short round. The top four from that round make it to nationals.
Nobles finished ninth in points over the 18 competitions, but moved up to fourth during the finals to qualify for nationals.
Nobles said the experience will help get him ready for other rodeos. Nobles is heading to Pearl River Community College and will major in instrumentation. He said he won’t compete in college rodeos but will continue to compete in other rodeos.
Nobles said he is thankful to everyone who made the trip possible.
Nobles is the son of Kerry and Myra Nobles of Bogalusa.