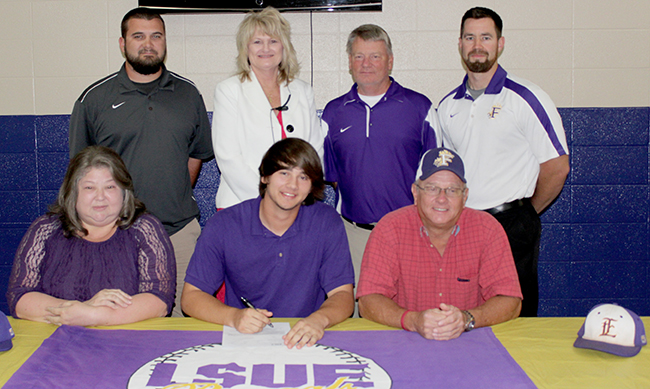 Franklinton pitcher Austin Bradford signed a letter of intent to attend LSU-Eunice and play baseball for the Bengals.
“I’m real excited going to a winning program and coming from a winning program,” Bradford said. “They won the championship this year, and I hope we can win one next year. It’s just real exciting knowing there will be someone there I know in Morgan.”
LSU-Eunice went 49-10 this year and won its fifth title.
The Bengals have had a great run of winning championships since 2006.
All five titles have come since the 2006 season.
The other three championships by LSU-Eunice have been in 2008, 2010 and 2012.
After forcing a winner-take-all-contest by coming back from a 10-1 deficit to defeat Western Oklahoma State College, 14-12, the Bengals were victorious over Western Oklahoma State College, 16-1, in the championship game.
The person Bradford is referring to is  Morgan Angelo, who played several different positions for the Demons.
Angelo played all over the infield, pitched and saw some time in the outfield for Franklinton.
Both players graduated from Franklinton in May.
Bradford said that having Angelo there will help make the transition easier. He said the two have been playing on the same team since they were about 4.
“Having a good teammate there will make the transition easier. We’ll be able to push each other because we know how each other functions,” Bradford said.
Bradford said his decision was based on several different things, including the winning tradtion, the coaches being real inviting and Angelo being there.
“It’s not like I’ll be going there alone. I’ll have a familiar face there,” Bradford said.
This season, Bradford was part of a Demons team that had a solid year.
Franklinton posted a 22-6 record.
They Demons reached the quarterfinals of the playoffs before falling in a best-of-three series to St. Michael the Archangel in the third game.
Bradford was part of a Demons team that made it to the quarterfinal round of the Class 4A state playoffs this season.
In the regionals against Lutcher, Bradford entered game three in a tough spot in the final inning.
The bases were loaded, nobody out, with the Demons up, 4-2.
Bradford came through in the clutch, striking out all three batters he faced on swinging strike threes, helping the Demons advance.
This year, Bradford was a first-team all-district player.
He talked about the key to having success.
“The great defense behind me and good run support gave me confidence. It’s easier when you can play confident,” Bradford said.
Bradford, who posted a 3.7 grade point average at Franklinton, will major in petroleum engineering.