DAILY NEWS PHOTOS/Chris Kinkaid Bush Venturer Crew 213’s Lauren Haik (left) and Morgan Sykes paddle toward the bridge near Sun, located on Louisiana Highway 21, during the 54th Bogue Chitto Race Saturday. The two, along with Jacey Ladner, were on the winning team in the girls’ beginner’s division. The 3-day event finished up at Lock No. 3 in Sun.

Ventuerer Scouts from Bogalusa Crew 313 and Bush Crew 213 capped off the 54th annual Bogue Chitto Canoe Lock No. 3 in Sun Saturday on a hot, sunny day.
Col. Bobby Miller said the water was low, but said the canoers did a good job.
The event, which featured 27 canoers across 11 teams, was a three-day race that spanned 110 miles.
The six-leg race began Thursday at the Mississippi Highway 98 bridge in McComb and ended at Lock No. 3.
The Crew 213 team of Lauren Haik, Jacey Ladner and Morgan Sykes captured the girls’ beginners with a time of 8 hours and 2 minutes.Second and third place were separated by just 54 seconds.

The second-place team featured Aryna Stephens and Bella Normand. They had a time of 9:13.59.
The third place group was Harley Hunt, Kimberly Davis and Emily Miley. Their time was 9:14.53.
Switching to Crew 313 beginners, the first-place team of Cade Ard and Josh Gulczynski finished the race 7:18.08.

DAILY NEWS PHOTOS/Chris Kinkaid
Venturer Crew 313 members Cade Ard (left) and Josh Gulczynski paddle toward the bridge near Sun. The two were part of the winning team for the boys’ beginners divison at the Bogue Chitto Race.

Coming in second was the squad of Chase Kelehan and David Jenkins witha time of 7:39.52.
The third place team was Matthew Dennis and Jeff Ard. They recorded a time of 8:08.53.
The fourth-place team of Barrett Wilkins and Robert Hall posted a finishing time of 8:12.54.
The beginners division races one leg per day. Canoers are allowed to race in the beginners division in just their first year of eligibility.
In the novice division, the group of James Stevenson III, Rage Rivers, Timothy Rester and Lloyd Sanchez paddled to a time of 15:52.22 for the win.
The cruising division was won by Dylan Seals, Chris Wintritt, Brannon Crosby, Tyler Rester and Matthew Rester. They finished the race in 13:03.43.
In the advanced aluminum division, Roo Breland, Rory Breland, Adam Economu, John Hartzog and Landon Arabie, had a time of 12:21.36 in their win.
The coveted Spot Bankston Memorial Trophy was won by alumni racers David Jenkins and Shannon Jenkins. 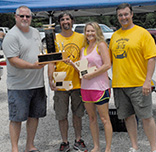 Alumni racers David Jenkins and Shannon Jenkins, who are flanked by Robert Terrell (left) and Jimbo Stillwell, are pictured after capturing the coveted Spot Bankston Trophy in the Bogue Chitto Race.The trophy is named for a dedicated supporter of the race who passed away in 1996.

On Thursday, the canoers will take to the waters in Arkansas for the 49th annual Invitational White River Canoe Race.
The event goes from Bull Shoals, Ark., and finishes in Batesville, Ark.
Participants will travel 117.6 miles.

“This race was good training for Arkansas,” Miller said.
On Thursday, the crews will go 42.6 miles before having a 35-mile day Friday. The race finishes up Saturday with the group traveling 40 miles to the finish. 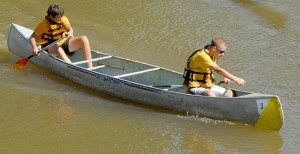 Chase Kelehan (left) and David Jenkins are pictured paddling on the Bogue Chitto Saturday. They finished runner-up in the beginners’ division.