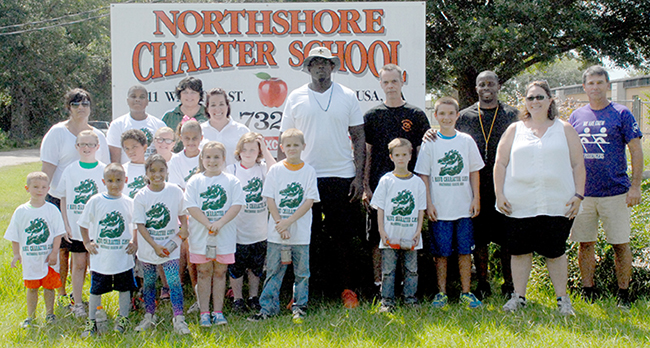 DAILY NEWS PHOTO/Chris Kinkaid Pictured are camp participants, coaches and parents from the “I Have Character” Camp, which took place Thursday afternoon at Northshore Charter School. It was the school’s first athletic fundraiser. That morning, the school had its athletic registration. This will be the first year the school is having an athletic program.

It was a historic day at Northshore Charter School Thursday.
The school, which is preparing to begin its third year, had registration for its first-year athletic program.
Northshore Charter Athletic Director Byron Garner said the school had a great turnout for sports registration.
The sports the athletes signed up for included soccer, volleyball, football, baseball, softball and basketball. Garner said football had the most signups.
Following registration, the school had the “I Have Character” Camp for the younger children. The clinic was the athletic department’s first fundraiser.
Children ages 9 through 11 participated in the clinic.
Garner said the camp basically focused on character.
The athletic director said Mike DiMaria spoke to the camp’s participants.
DiMaria is an area representative for the Fellowship of Christian Athletes, covering Tangipahoa, Livingston and St. Helena parish.
“He left us with some good FCA resources that we’re going to be using,” Garner said.
Garner said they also introduced the coaching staff.
After that, Garner said they broke the children up into groups.
“We had volleyball. We had kickball. We had baseball, football and track. We just kind of gave them fundamentals of sports character,” Garner said.
Garner said the camp was about planting the seed.
“I’m a minister and I believe in seed sowing, so you’re sowing the seed of good character,” Garner said. “You’re sowing the seed of a good student athlete with student being the emphasized word. So if they’re a good student and then they work as hard as they can at being the athlete, success is going to come. Whether it shows in wins or not, it’s going to come.”
Garner said one of the greatest rewards of the camp was seeing the parents.
“We had probably over 12 parents that not only came and showed up with their children, but stayed, filled out the paperwork and walked through the camp,” Garner said.
Garner praised the staff that helped out. He said the entire staff was volunteers
“The whole staff did a great job,” Garner said. “They made sure that we had something to do at each event from registration from 10 to 12 to the actual camp, 2 to 4. Every coach working was a volunteer.”
Students can still register for school and athletics at Northshore Charter School Monday through Thursday from 8 a.m. until 4 p.m. on those days.