Franklinton ties St. Paul’s School in final 7-on-7 of the summer 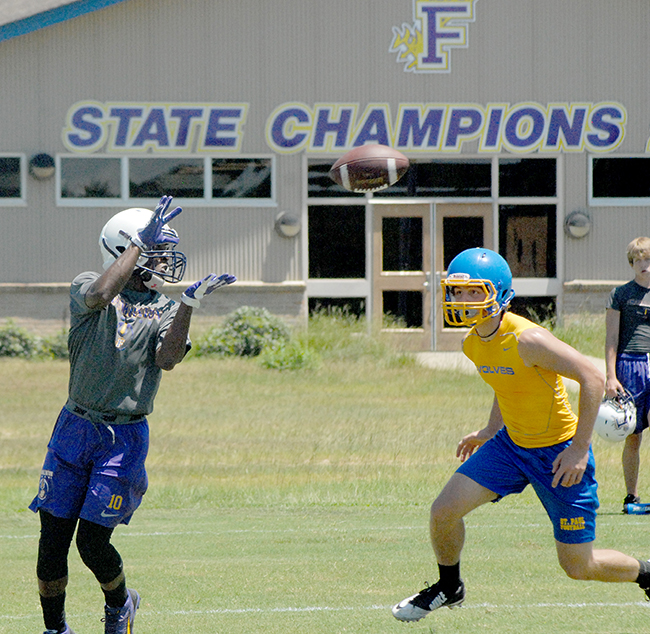 DAILY NEWS PHOTO/Chris Kinkaid Franklinton’s Azende T. Magee prepares to catch a pass from Tajh Magee during Wednesday’s 7-on-7 contest at home against St. Paul’s. It was the Demons’ final 7-on-7 of the summer.

Franklinton and St. Paul’s School scored seven touchdowns each in the teams’ final 7-on-7 contest against each other this summer at FHS Wednesday.
After having a tough day last week at St. Paul’s last week, the Demons played much better this time around.
“I thought our kids came out with a little more intensity,” Franklinton coach Shane Smith said. “We threw the ball better. We made better reads in the passing game. Defensively, we had three interceptions, so coverage was a lot tighter and we were making plays on the ball.”
Quarterback Tajh Magee threw five touchdown passes for the Demons while Jacob Smith threw a pair of TDs for the Demons, as the teams played on a 40-yard field.
Five players combined to catch the touchdowns, led by Azende T. Magee, who posted three touchdown receptions. Lagarian Bell, Ryché Jenkins, DiJimon Jenkins and Adrian Fox caught one each.
Defensively, Kobe Crain intercepted two passes, and Tremarrio Magee picked off one for Franklinton.
The offenses began the scrimmage by turning the ball over on downs.
St. Paul’s then scored to go up 1-0.
Franklinton countered with Tajh Magee hitting Azende T. Magee on about a 35-yard touchdown pass.
The Wolves went in front 2-1 on a 40-yard touchdown pass on the second play.
Franklinton tied it, with Smith finding Bell for a score.
St. Paul’s scored the two touchdowns before Tajh Magee connected with Ryché Jenkins, trimming it to 4-3.
The Wolves tallied on the next possession for a 5-3 lead.
Franklinton threw an interception, but the Demons defense kept it 5-3 when Crain picked off his first of two passes.
The Demons scored on the following possession when Tajh Magee was on target to DiJimon Jenkins for a tally to pull Franklinton within one.
Crain made his second pick, and then both teams turned the ball over on downs.
The Demons then evened the score as Smith found Fox for a touchdown.
Tremarrio Magee intercepted a pass on the next series. Franklinton turned the ball over on downs, and then the Wolves took the lead, 6-5, on a touchdown pass.
But the Demons tied it, with Tajh Magee hitting Azende T. Magee for a touchdown.
St. Paul’s scored on the first play. Franklinton threw an interception.
On the next series, still down, 7-6, the Wolves were at about the 2, but the Demons kept St. Paul’s out of the end zone.
Tremarrio Magee forced the ball out of a receiver’s hands near the back of the end zone, and Markus Conerly knocked down a pass to force the turnover on downs.
After the clubs turned the ball over on downs, Franklinton scored on the final possession to finish the contest up in the 7-7 tie.
Tajh Magee found Azende T. Magee on a short pass. Azende T. Magee made a few defenders miss and used his speed to score the touchdown.
This was the Demons’ final 7-on-7 of the summer.
Coach Shane Smith said his club has had a productive summer.
“It’s the last 7-on-7 of the year, but we’ve played in the tournaments, so we’ve done as much 7-on-7 this summer, probably as we have since we’ve been doing it,” Smith said. “I know we did more than we did last year because this year, we did two tournaments (one at SLU and another in Gonzales). In both tournaments, we competed well. Our kids advanced to the quarterfinal round in both tournaments, so it’s been a productive summer. Obviously, we’ve got to make sure we continue to finish strong in the weigt room and with conditioning day in and day out back here.”
Franklinton is traveling to Slidell to face the Tigers for the scrimmage, which is set for Aug. 20.
The jamboree is against John Curtis at Mandeville High School.
The regular season opener is Sept. 4 when Franklinton travels to Covington to take on the Lions.
Franklinton is coming off of a year when they made it to the Class 4A state semifinals before falling to eventual state champion Neville. The Demons are 22-5 over the past two years, and every team they’ve lost to has gone to either the state semifinals or the championship game. Two of the five losses have been to state champions.