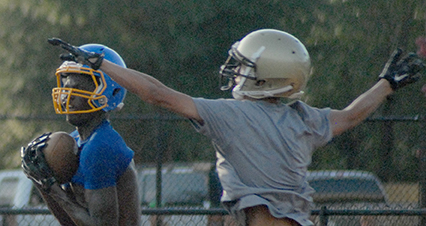 Ben’s Ford Christian School played well for two quarters against Northlake Christian School in Covington Thursday but struggled in the final period in a 39-32 loss to the Wolverines in 7-on-7 action at NCS.
The teams played a trio of 20-minute periods on a 40-yard field. The clock ran for the first 19 minutes before the teams went to the standard clock operating rules for the last minute. Extra points were from the 5.
Ben’s Ford, which had 11 players Thursday, outscored Northlake Christian, 32-19, through the first three periods, but the Wolverines tallied 20 unanswered in the final period.
Holden said his team’s numbers are low in terms of the number of players on the roster, but he said they aren’t going to use that as an excuse.
The team has 16 players between 10th and 12th graders.
“We’ve got to get in a little better shape,” Holden said. “But we’re going to play ironman football. Everybody’s playing both ways. I’m excited about this group.”
Garrett Pounds threw all five of the Eagles’ touchdowns. Four of them went to drives of forcing turnover on downs.
The teams played to a 12-12 tie in the opening period.
The Eagles took a 6-0 lead on the game’s first possession but were unable to convert the extra point pass with 15:49 remaining.
Northlake Christian tied the game, 6-6, on the following possession. The PAT was incomplete with 9:21 remaining.
Ben’s Ford turned the ball over on downs, and the Wolverines took the lead, 12-6, after the extra point pass fell incomplete.
The Eagles evened the game with 1:47 on the clock. The PAT pass was not completed, keeping it tied at 12-12.
The clock ran out on Northlake’s next possession, keeping it 12-12 after one.
Each team had a big period over the next two.
The second quarter belonged to Ben’s Ford.
The Eagles went up 19-12 on the first possession of the second quarter. The conversion was good to make it 19-12.
After Ben’s Ford’s defense forced a three-and-out, the Eagles were back on the board and were successful on the extra point pass. It was 26-12 with 8:09 on the clock.
NCS scored on a 40-yard TD and then was successful on the extra point, making it 26-19 with 4:14 to go.
That was enough time for Ben’s Ford to score once more before the conclusion of the period. The extra point pass was incomplete.
Ben’s Ford was up 32-19 after three quarters.
The Wolverines tallied on all three of their possessions in the final quarter for the win.
Holden said he saw some good things from his group.
“Defensively, we got beat a couple of times,” Holden said. “We had a couple of blown coverages. That’s going to happen. That’s why we’re out here doing this. Offensively, Dionte (Fernandez) made some plays for us. Corey (Caldwell) made some big plays. Everybody offensively did well.”
Holden also praised the play of Pounds, who is the team’s backup signal caller.
Pounds was playing in place of the starter, Daniel Pittman, Thursday.
Defensively, Holden said Caldwell played outstanding at cornerback.
“He played his tail off,” Holden said. “He made some big plays out there for us. He’s new to playing corner. The last two years, he’s played linebacker and nose tackle. He’s new to corner, but he’s making some outstanding plays out there.”
The Eagles have one 7-on-7 left this summer. Ben’s Ford is traveling to Centreville Academy Thursday at 5 p.m.
Ben’s Ford has a scrimmage Aug. 7 at Simpson Academy. The following week, the Eagles are hosting a jamboree.
Ben’s Ford’s regular season opener is Aug. 21 with a road game against Pickens Academy in Alabama.
The home opener for Ben’s Ford is Sept. 4 against Wilkinson County Christian Academy.
The Eagles are coming off of a historic season.
The team reached the playoffs for the first time in the football program’s history.
Ben’s Ford went 6-4 during the regular season before falling in the opening round of the Mississippi Association of Independent Schools playoffs to Silliman Institute.