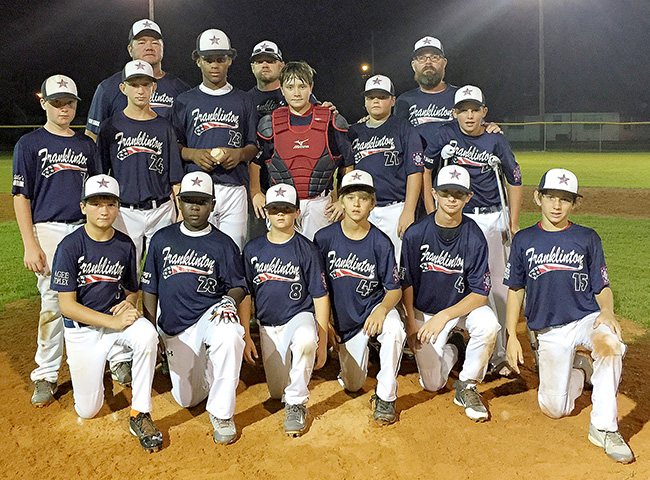 The Franklinton American 11 and 12-year old team finished runner up in the Dixie Youth Baseball District VI Tournament, which took place July 3-8, at the Franklinton Dixie Baseball Fields.
Franklinton American entered Wednesday’s play needing to win one of the two games to capture the double-elimination tournament, but Franklinton National was up to the task and captured both contests, 3-2 and 12-4.
Franklinton American coach Chris Ginn credited his opponent on the way they played Wednesday.
“Our bats just deserted us (July 8). We had been scoring double-digit runs during the tournament, but the credit goes to their pitching. They held us to two runs in the first game and three in the second game. We had been putting the ball in play a lot, but (July 8), we probably only put like 7 or 8 balls in play in each game,” Ginn said.
Ginn also credited Franklinton National on its offense.
“They swung the bats well,” Ginn said. “They did a good job of driving the ball to the gaps. They played inspired baseball. Credit them. I can’t say we did a lot wrong, they just beat us.”
Franklinton American entered play on July 8 on a nine-game winning streak, which included wins in the first three games of this tournament. The team defeated Gonzales American, Franklinton Nationals and Gonzales American.
Ginn said that Wednesday’s result doesn’t take away from the way his team played in those nine games.
“The good thing about baseball is you get to play another day,” Ginn said. “We’ve got the regionals coming up beginning July 17 in Winnsboro. We’ve got a great group, great parents. We came together as a family. Credit the kids and credit the families.”
Winnsboro is in Louisiana and the team is heading there for the North Regionals. Winnsboro is about 45 minutes outside of Monroe. The top winning team advances to the state tournament to face the winning squad from the South Regional in a best-of-three match up.
In the 11 games, Franklinton American hit 18 home runs. Mike Martin leads the way with six.
Matthew Ginn and Hunter Blackwell have three each while Zach LeMaire and Isaac Wascom have posted two each, and Triston Jones and Landon Keller both have one.
The District VI Tournament featured six teams.
The top two moved on to play in the regional round.
Franklinton National is going to the South Regional in Ponchatoula.