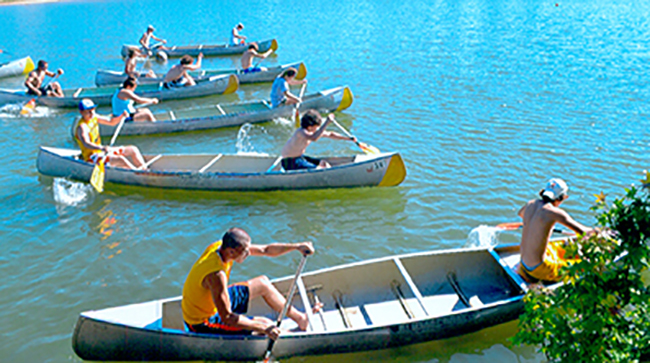 By Col. Bobby Miller
SPECIAL TO THE DAILY NEWS

With countless hours of practice and several canoe races behind them, local venturer scouts are set to compete in the 54th Explorer/Venturer 110-mile Bogue Chitto River Marathon Canoe Race.
The annual event takes place Thursday through Saturday with the competition being over a six-leg 110-mile course on the Bogue Chitto River.
It begins at the Mississippi Highway 98 Bridge in McComb, Miss., and ends at Lock No. 3 on the Pearl River Navigational Canal in Sun.
Registration starts at 8 a.m. on July 16, and the competition gets under way at 9 a.m.
The local Tuchenna Scout District, which encompasses Washington and St. Tammany parishes, hosts the event.
The Istrouma Area Council of the Boy Scouts of America, headquartered in Baton Rouge, sponsors the race.
The competition includes boys and girls aluminum canoes and an open cruising racing division.
In addition to the advanced canoe racing division, there is a novice division and a beginners’ class in the aluminum canoes for first-time canoers.
The opening leg is from the Highway 98 bridge to the Walker Bridge Waterpark in Tylertown, Miss., with a quick change for paddlers.
New paddlers take over for the second leg, which ends at the Warnerton Bridge.
After lunch, the third leg starts at 1:30 p.m., going to Franklinton where participants are expected to arrive at the Franklinton/Kentwood VFW Post 7195 at approximately 4:15 p.m.
Post 7195 is providing a meal for the paddlers and spectators witnessing the race. This will end competition for the first day.
The fourth leg gets under way at 8 a.m. Friday morning proceeding from Franklinton to Enon with canoers getting to the Bogue Chitto River Adventures Tube and Kayak Center near the Enon Bridge at about 10:30 a.m.
After lunch, the fifth leg begins at 1:30 p.m. to end around 4 p.m. at the Five Lakes Campground. It is located three miles west of Fifth Ward School on Louisiana Hwy. 40.
Scouts and guests will be treated to a dinner, hosted by Washington Parish Sheriff Randy Seals.
The final day is set for 9 a.m. Saturday, ending at Lock No. 3 in Sun at about 11:30 a.m.
On the last leg, scouts will be joined by a special division of former competitors of the race. These alumni explorer/venturer canoers will compete for the coveted Spot Bankston Memorial Trophy.
The trophy is named for a dedicated supporter of the race who passed away in 1996.
Individual awards will be presented after the race between 11:30 a.m. and noon.
During the race, the Varnado Fire Department will provide safety patrol boats.
Bogalusa Venturer Crew 313, sponsored by the Daily News and Bogalusa Lions Club, will be defending its titles won last year.
Newly organized Bush Venturer Crew 213 will be competing in their first year in the girls’ division. Last year’s girls division winner, Varnado Venturer Crew 200 is inactive this year, following the passing of their beloved advisor Dora Mohon. They do intend to be back in 2016.
Following the local competition, Crews 313 and 213 will depart for the National Explorer/Venturer 120-mile White River Canoe Marathon Race. It begins on the White River in the Ozark Mountains of northern Arkansas July 23. Crew 313 will be defending their titles from that race.