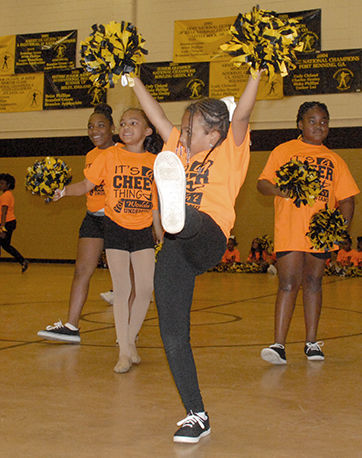 Bogalusa High School’s cheerleading team hosted its first camp June 2-6 and taught the participants different aspects of of cheerleading over the four days before performing for their parents on the final day.

“On that first day, they didn’t know what to look forward to,” Ashley Peters said. “They came in kind of tired and sleepy, but they were very energized and willing to learn after that. On a scale of 1-10, I’d give the first day a 5, but all 10s after that.”

Peters along with Katasha August, who are Bogalusa High School cheer coaches for the school’s cheerleading team, helped run the camp.

August is also the head sponsor of the cheerleading team, the majorettes and the flag team.

The clinic featured three stations. They had stunt classes, arts and crafts and fun in the sun.

Stunting in cheerleading is when a cheerleader is picked up and thrown in the air.

Some of the things they made in arts and crafts included cheer signs, cheer megaphones and cheer hair bows.

The fun in the sun part had a dance session, a cheer session and a chant session.

Everything over the four days led up to the cheerleaders performing for their parents Friday afternoon.

“They were excited to show their parents what they learned during the week,” Peters said.

Peters said they are looking forward to having the cheerleading camp once again next year.