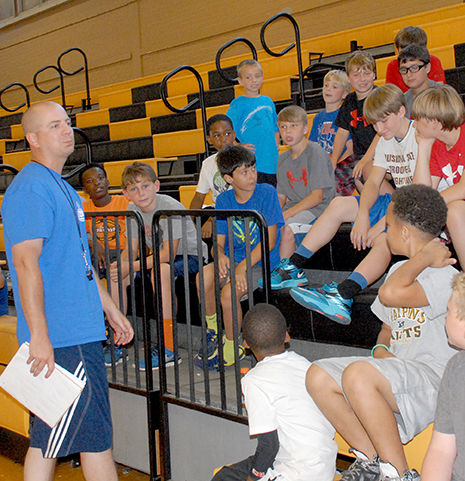 The clinic taught the participants basketball and life skills.

“This is just something the Lord put on my heart to do a couple of years ago and we finally got everything ironed out to be able to do it this year,” Pastor of Oak Grove Baptist Church Derek Dantin, who is the camp director, said.

Dantin said they’ve been able to preach the gospel and teach basketball to the 40 participants, who are in the fourth through eighth grades.

Dantin said another purpose of the camp is to leave the confines of the church walls, get out and be a presence in the community.

“This is our first year, and we’re looking forward to doing it next year and just letting it get bigger and bigger,” Dantin said.

Every morning, a preacher from a local church gives the campers a devotion.

“We’re teaching them really just fundamentals of basketball, just the basic things, and then we get a community leader to come in in the afternoon and just speak about success, being successful, being young men and then obviously we do the competitions. It’s always good to compete. It’s always good to strive to be the best,” Dantin said.

The competitions are bump, free throw and hot shot.

“It’s weeklong. We keep the scores every day, so the pressure mounts as the week goes on, and the kids really enjoy that aspect of it,” Dantin said.

One of the campers, Micah Wascom, who is going into the fourth grade at Ben’s Ford Christian School, said the camp was pretty fun.

He said the best part is the games and said bump is his favorite.

Montgomery spoke to the group Wednesday and talked about legendary basketball coach the late John Wooden’s pyramid of success.

The message was pursuing personal excellence and being the best you can be everyday.

Montgomery said it’s wonderful for him to come out and speak to the campers.

“Success for us as a community is seeing these young fellas grow up to be fine young men and contributing to our society. So, hopefully, some of the words I spoke today will touch their hearts and help them develop as people,” Montgomery said.

Dantin said the children were able to attend the clinic for free because of the camp’s sponsors, which included Thomas Industrial, Eye Save Optical, Nielsen’s Pharmacy, Romano Investments, H.L. Brownstone and Oak Grove Baptist Church.

“If it wasn’t for the sponsors, if it wasn’t for coach (Ken) Martin and Bogalusa High School allowing us to do this, it wouldn’t be possible, so we really want to thank them,” Dantin said.

“I am so proud of Rev. Dantin and the work that he and his volunteers are doing to restart a camp that was done for many many years here in the Bogalusa community,” Martin said.

Martin said Dantin starts the camp ever day with prayer.

“He has a speaker in every day,” Martin said. “They teach the fundamentals of basketball. They teach team play. They teach trust, loyalty and all of the values that can make a young person successful, and I’m proud of that.”

Four coaches helped out with the camp, including Dean King, Mike Keen, Aaron Thomas and Jeremiah Slocum. King is a coach at Bowling Green, Keen coaches at Annunciation Catholic School, Thomas is a coach at Fifth Ward Junior High School in Bush and Slocum is entering his junior year at Ben’s Ford where he plays basketball for the Eagles.