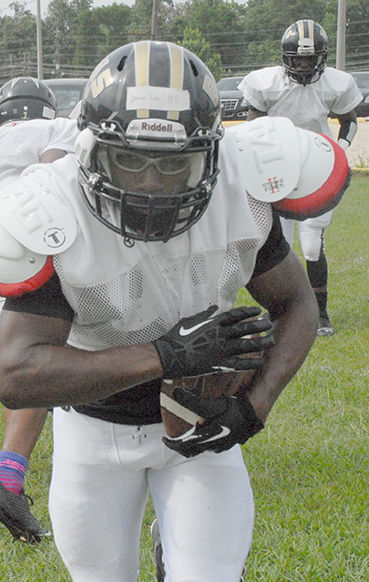 Bogalusa’s Lumberjacks take to the field May 15 for a spring game involving three teams at Lewis V. Murray Jr. Stadium on the campus of Bogalusa High School.

Besides Bogalusa, the event has South Plaquemines and Mentorship Academy.

The junior high gets under way at 4 p.m., and the high school follows at 5 p.m.

“We’re looking to get lined up right. We’re looking for hustle plays, who’s going to give it 100 percent,” Bogalusa first-year coach David Roberts said. “On offense, we’re going to keep it simple. Guys are learning the system, so we want them to just go out there and play. Defensively, we want to see guys getting to the ball and being physical.”

Roberts said this is very important for his team.

“The kids are getting to learn us and we’re learning them,” Roberts said. “We’re learning each other on the coaching staff because we’ve never coached together before. Hopefully this is just the start of big things. We’re really working on fundamentals. That’s what we’re stressing is fundamentals. Football programs are built with hard work, weight lifting and fundaments. The guys on the coaching staff all kind of think alike, so it’s been an easy transition.”

The first half of the scrimmage will feature a trio of 10-minute quarters, using the standard clock rules. Each team will get one timeout.

The second half of the will have the same format, except with a running clock.

Bogalusa enters this season after reaching the playoffs. The Lumberjacks went 4-7 last year and lost in the opening round of last year’s postseason, 35-7, against Loranger.

Hilliard, a running back, played all eight of his NFL seasons in the Crescent City for the New Orleans Saints (1986-1993).

Jackson’s Hall of Fame career spanned 15 seasons (1981-1995) with the first 13 coming with New Orleans. His last two seasons were with the San Francisco 49ers.

The first four came with the Saints before his final three seasons with Washington.