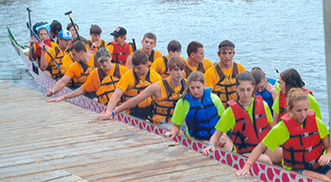 Looking for something really out of the ordinary this weekend?

Venturer scouts of Bogalusa Venturer Crew 313 will be participating in its fourth consecutive dragon boat race, which will have approximately 38 boats competing.

Venturer Crew 313 will be defending its title won last year. It was the third such championship since entering the dragon boat competition.

These championships were won with Varnado Venturer Crew 200. They provided the requisite number of girls in the coed event.

Crew 200 is inactive this year. Newly organized Bush Venturer Crew 213 will provide the eight girls required on the paddling team. The squad also includes 12 boys and a drummer provided by Crew 313.

Races are scheduled to begin at 8:45 Saturday with three teams racing in each heat. The competition continues until a winner is crowned, which is anticipated to be around 2 p.m.

The competition includes teams throughout Louisiana and at least one from Canada.

Dragon Boat Racing is considered the ultimate sport where synchronicity and coordination of the team is more important than strength.

The local scouts have shown they possess the attributes to successfully compete against their adult competition by their successes in canoe and pirogue races both local and national.

Dragon Boat Races began in ancient China and are now a fast-growing watersport across the world.

In the race, teams of 20 rowers, 10 on each side of the boat, paddle in unison to the beat of a drummer at the head of the boat.

Each boat measures 40 feet long and three feet wide, with a dragon head at the bow and a tail at the stern.

The fun and experience achieved by the young venturer scouts against their adult competition is everlasting made possible by the sponsorship of the Bogalusa Lions’ Club, which is sponsoring two teams.

The St. Tammany Tourist Commission and Madisonville Chamber of Commerce host the race for the benefit of Breast Cancer Awareness.