Demons strong in Region 3-4A Meet 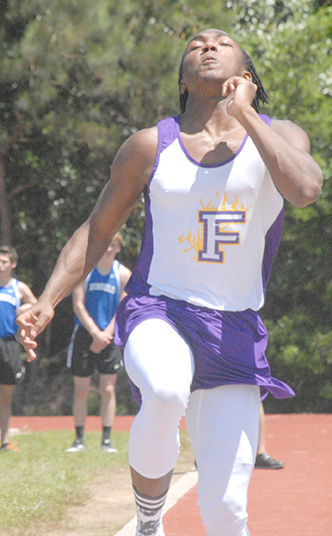 Franklinton was strong in the Region 3-4A meet, as eight athletes across five events advanced to state Wednesday at East Jefferson High School in Metairie.

Williams captured the javelin with a distance of 150-6. He won by more than five feet over runner South Terrebonne’s Louis Blanchard (145-4).

Partman captured the triple jump with a distance of 43-6.5.

Cotton was runner up for the discus at 131-0. He finished behind Vandebilt Catholic’s Paul Reding, who posted a 132-9.

Burkhalter was third in the shot put at 44-8.5. South Terrebonne’s Louis Blanchard captured the shot put with a distance of 48-10.

Franklinton’s 4×200 relay team is going to state after coming in third place with a time of 1:30.60 in a very close race.

Wednesday’s meet was a qualifying meet. The top three finishers from each event advanced to the state meet. The Class 4A state meet is taking place May 9 at LSU’s Bernie Moore Stadium.

Franklinton is the only Class 4A team in Washington Parish.

Also for Franklinton, Rodney King finished eighth in the javelin (130-0) while Cotton was ninth in the shot put (38-11).

Partman took sixth in the long jump (19-4.5), as Landry/Walker’s Danvayon Pickett was victorious with a distance of 21-2.

The Demons were fourth in the team competition with 45 points.

Landry/Walker was just 10 points behind for runner up. Assumption (63) was third and McDonogh 35 (44) was fifth. Eighteen teams scored at least one point.

In the girls, Breanna Hebert was seventh in the javelin (85-10). St. Scholastica Academy’s Samantha Zelden won the javelin with a throw of 124-1.