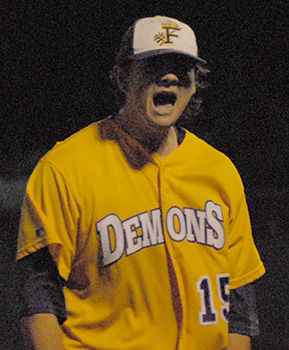 Things started slow for third-seeded Franklinton, but the Demons finished strong in a 5-3 Class 4A bi-district playoff round victory over Edna Karr at home.

Tuesday’s postseason game had everything you could ask for in a playoff game. It featured big moments, clutch hitting and solid defensive plays.

No. 30 Karr, which finished with a 15-9 record, proved to be better than its seeding would indicate.

“It was a great game,” Franklinton coach Jeff Tageant said. “We beat a very very very good team. Their pitcher (Tyree Thompson) is one of the best we’ve seen all year.”

The Cougars jumped out to a 2-0 lead with single runs in the first and third innings.

Reggie Augustine opened the contest with a single to left before stealing second and taking third on a groundout to pitcher Morgan Angelo by Thompson.

In the third, Myran Pelrean walked, stole second, advanced to third on a wild pitch and scored on Augustine’s RBI groundout.

The score stayed 2-0 until the fifth, and fans were in for an exciting three innings of baseball as the game began reaching its climax in the single elimination round.

Franklinton’s offense got things rolling in the fifth. Trevor Jenkins, who was one for two with a walk and a run, singled to left.

Jamarian Crain advanced Jenkins to second with a sacrifice bunt.

Josh Magee, who was two for two and scored twice, was intentionally walked. That brought up pitcher Austin Bradford, who came in after Angelo got injured. Bradford reached on catcher’s interference to load the bases. C.J. Estave, who had a hit, two RBIs and was intentionally walked, was next, and he delivered a game-tying two-run single to right field, plating Jenkins and Magee to make it 2-2.

Johnathan Crain was next and gave the Demons the lead, 3-2, with a base hit up the middle, scoring courtesy runner Trevor Davis home with the go-ahead run.

But Karr responded with a run in the sixth, as the Cougars took advantage of two Demons’ errors.

Thompson began the frame with a double just inside the bag, down the third-base line.

D’Andre Williams reached on an error, putting runners at first and second. Corey Bush put down a bunt but a wide throw to third allowed the tying run to score.

Karr still had runners at first and second and nobody out.

Bradford navigated his way through the rest of the frame.

The next batter hit a comebacker to Bradford, who threw to Mack McElveen for the force out at third, keeping it the same situation, but with one out. Then there was a pop up on the infield that dropped. The infield fly rule was called. The batter was out, but both runners moved up at their own risk, putting them at second-and-third with two outs. Pinch hitter Corey Levy was hit, but Bradford came back with a strikeout to end the frame. It was 3-3 after 5 1/2 innings.

“They put it to us,” Bradford said. “They were a good team. We had to work on the mound, work in the field and work at the plate. They were a quality team. We were able to pull it out.”

The game continued to reach an exciting finish, as the Demons responded with two runs.

Jenkins began with a walk. Jamarian Crain pushed a perfect bunt past the pitcher and reached without a throw. Josh Magee dropped down a perfect bunt for a single, which loaded the bases. Jamarian Crain got caught in a rundown and was tagged out after looking to possibly score the go-ahead on a ball in the dirt. Karr’s catcher Augustine made one of several solid plays on pitches in the dirt to prevent Crain from tallying. Karr intentionally walked Estave to reload the bases for Johnathan Crain with the game still tied, 3-3.

Crain, who had three hits and three RBIs, came through with his second clutch hit of the game by singling to left. Magee, carrying the go-ahead run, scored and the Demons were back in front, 4-3.

“I was thinking like coach taught me all year, stay focused, take a deep breath, tighten your hands up and grip the bat. He delivered that pitch, I took it to the opposite field,” Crain said.

But no lead was safe. Franklinton retired Karr in just four batters, but not without more excitement and great plays.

It began with one out when Malik Shaheer was hit. Thompson hit what appeared to be a single to centerfield. Magee put his glove up as he came in, making it look as if he had a chance to catch it. He fielded the ball and threw to second baseman Landon Magee for the 8-4 force out, and the second out of the inning. What could’ve been first-and-second with one out was now a runner on first and two outs.

“Coach (Nate) Murray had worked with the outfielders,” coach Tageant said. “We sort of deek when he thinks he’s fixing to catch it. That slows the runner up. It slowed him up and he (Josh Magee) threw a strike to second. We’ve talked about it for years and Josh did it to perfection. It worked out for us.”

The game’s final out didn’t come without more excitement. The batter hit a screamer toward right field, but Landon Magee made an unbelievable play. Magee sent his body flying to the left with a jump and a dive. He somehow made the catch to end the game.

“It was reaction,” Landon Magee said. “I really thought it was too high, but I didn’t want to take the chance and not go for it.”

Coach Tageant praised his four-year starter on the great play.

“I mean, great play,” Tageant said. “It doesn’t surprise me because that’s the kind of kid Landon is. He’s made a lot of plays in his four years and that was a great one to end it.”

At the plate, Landon Magee posted a hit.

Franklinton moves to the regional round. The next two rounds of Class 4A is under a new format for the classification. The regional round and quarterfinals are a best of three series.

Franklinton plays 14th-seeded Lutcher at 4:30 p.m. Friday. The teams will meet Saturday at 1 p.m. for the second game, and if needed, the third contest will be at 4 p.m. Saturday.

The games will be at Franklinton. Lutcher will be the home team for the second contest.