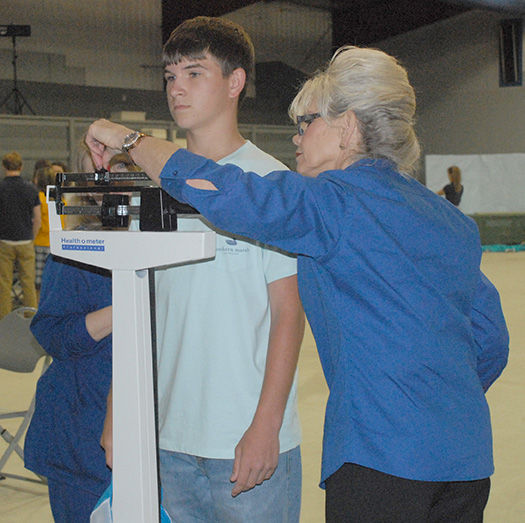 Doctors from the LSU Rural Family Medicine residency program returned to Ben’s Ford Christian School for a second straight year to administor physicals for the Eagles’ athletes Friday afternoon in the school’s gym.

It’s the second year they’ve done this for Ben’s Ford. The program is part of the Bogalusa Sports Medicine Initiative.

It began in 2013 to help bring sports medicine coverage to the rural community.

On Friday, the group is heading to Bogalusa for the Lumberjacks’ physicals.

Besides the physicals, the group is on the sidelines at Ben’s Ford Christian School and Bogalusa home football games along with the EMS in case an athlete gets injured.

Dr. Jay Umarvadia said the group is going to expand sports coverage in the future.

Umarvadia said they have a great rapport with the athletes, parents and coaches, many of which, are patients at their clinic on Avenue F.

“We’ve seen these kids for the last year, treated them, and we have a great support system backing us here at Ben’s Ford,” Umarvadia said.

Umarvadia said having taken care of these athletes over the last year would help them out this year if an injury were to happen.

One of the big topics across the sports world is head injuries.

At the physicals, the group took neurocognitive baseline scores.

Some of the tests given were balance testing, gait testing, range-of-motion and long-and short-term memory recall tests.

“It helps out. It helps the kids out. It helps everybody out around here as far as being able to go on and get their physical. And it’s free,” Holden said. “You can’t beat that. It saves the families some money. It just saves a lot of headache. We can stay very organized with our physicals as far as they go.”

Holden said they also send people to help them out on the sidelines on Friday nights.

“We really appreciate that. We can’t thank them enough for being there on Friday night. Most of the time, it might just be a cramp or something like that, but you never know when something serious might happen,” Holden said.

The physicals being at the school also make it more convenient for everyone involved.

“Before they came, we were going all of the way to Covington,” Holden said. “On a Saturday morning, we’d have to load up a busload of kids and take them to Covington. This is a lot more convenient.”