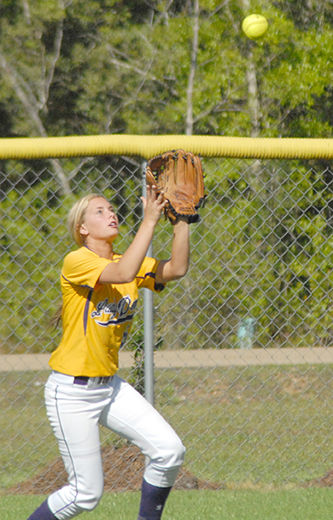 Franklinton’s Lady Demons posted a 2-1 record in the Live Oak Tournament, which took place Friday and Saturday before falling to St. Scholastica Academy on the road Monday.

The Lady Demons led, 2-0, after four before putting up nine runs in the fifth and then keeping Holden scoreless to wrap things up.

Hannah Adams allowed one hit over the five innings. She posted eight strikeouts and walked four.

At the plate, Adams singled, drove in a run and scored twice. Baylee Mixon led the offensive attack with two hits, two runs batted in and a run scored.

Haley Sanford, Carly Shipley, Macy Purvis and Austin Felder had one hit each. Sanford and Purvis drove in a run and tallied twice each.

Shipley finished with an RBI and a run scored while Felder posted a run batted in.

Lexi Williams scored a run. Faith Chauvin and Bethany Sandifer drove in a run and scored once each while Laken Spears had an RBI.

The game was tied, 14-14, after seven but Franklinton scored a run in the eighth for the victory.

One of Adams’ hits was a triple. She finished with four RBIs and a run scored.

Sanford homered, drove in four runs and scored once.

Spears and Chauvin finished with a hit each.

Sanford was the winning pitcher after allowing two runs over 5.2 innings on seven hits. She struck out one and walked nobody.

The final contest was a 10-3 setback to Pope John Paul II.

Williams and Sanford tallied once each and Spears drove in a run.

Mixon had the other hit. Shipley scored a run while Sandifer drove in a run. Sanford was the losing pitcher.

On Monday, the Lady Demons lost to St. Scholastica, 11-1, in six innings.

FHS had just two hits, both by Katelyn Capo, who also drove run a run. Felder tallied the run for the Lady Demons. Sanford was the losing pitcher.