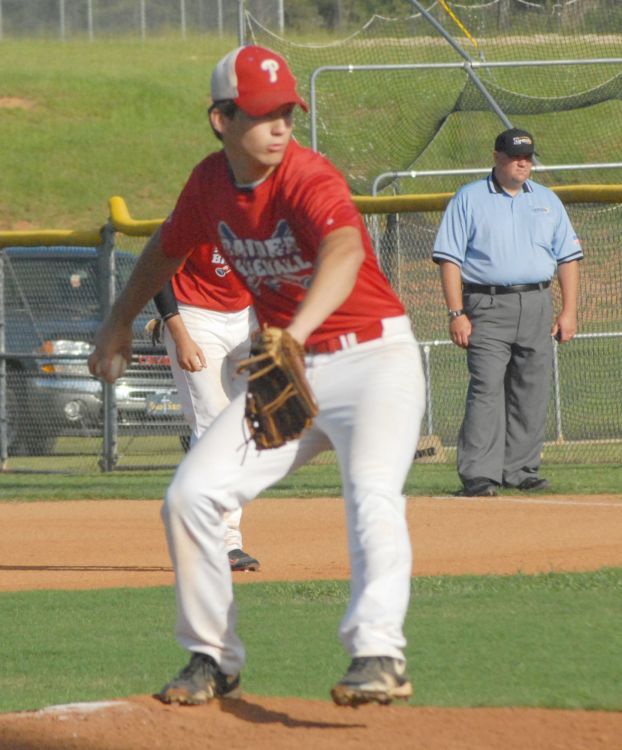 Rion Terrell was strong on the mound Tuesday at home for Pine, throwing five shutout innings. He allowed two hits with five strikeouts and three walks.

Offensively, Terrell had a hit.

Jonathan Lyons relieved Terrell in the sixth and finished things off with two hitless innings, as he struck out four.

The Raiders had just five hits, as the Yellow Jackets committed 11 errors.

Ethan Knight recorded two hits, two runs scored and a run batted in for the Raiders.

Jamie Adcox and Hunter Cooper posted the other two hits for Pine.

Adcox drove in a run and tallied twice.

Cooper’s hit was a double, and he posted a run.

Jordan Phelps drove in a run and scored once.

Connor Holmes tallied twice, Will Polk crossed the plate once.

Mt. Hermon’s two hits were one each by Trey Roberts and Chandler Johnson.

Davin Frazier was the losing pitcher.

Both of Thursday’s games, which were at Mt. Hermon, went five innings.

In Thursday’s 17-6 contest, Pine jumped out to a 10-0 lead after one before going on to the victory.

Phelps recorded three hits, including a triple, and two RBIs for Pine.

Hunter Cooper’s hit was a double. He scored twice and had a run batted in.

Brown recorded a double, an RBI and a run scored while Voth tallied a run and Trey Cooper had a double and two runs scored.

Cobb’s doubled and posted two runs. Fonda had an RBI and a run scored.

Phelps was the winning pitcher.

Frazier, Smith, Byron Hyatt and Trey Roberts had one each.

Frazier scored two runs while Smith scored once and drove in one. Hyatt posted an RBI and Roberts tallied a run.

Johnson and Jase Fortenberry scored a run each for Mt. Hermon. Fortenberry also had an RBI, as did Cody Wages.

Preston Knight was the losing pitcher.

Holmes drove in a run and scored once, Adcox finished with three runs scored and an RBI.

Knight tallied twice and had an RBI. Roach drove in two and scored once. Lyons, Terrell and Ard logged an RBI and a run scored each.

Also for Pine, Voth, D.J. Thomas, Polk and Fonda scored once and drove in one each. Hunter Cooper scored four runs.

Temples drive in a run.

Johnson singled twice and drove in a run for the Yellow Jackets.

Frazier, Smith and Roberts had one hit each.

Frazier’s hit was a double while Smith drove in a run and Roberts tallied a run and an RBI.

Matthew Tetreau, Fortenberry and Dylan Clark posted one run each, and Preston Knight drove in a run.

Smith was the losing pitcher.

Lumberjacks’ Reunion The annual Lumberjacks’ reunion is taking place May 2 at Bino’s Restaurant in Bogalusa at 10 a.m. All... read more