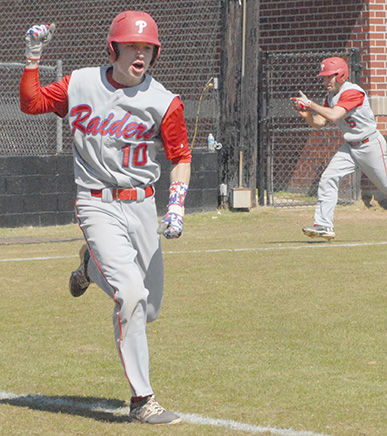 Pine got off to an 0-2 start in the Pearl River Tournament but finished things off with an exciting victory over East Jefferson Saturday morning.

The game was tied 2-2 after one and things remained that way until the bottom of the sixth.

Pine had runners on the corners and two outs. The Raiders ran a delayed steal with courtesy runner Trey Cooper at first. The throw went to second. Ethan Knight, the runner at third, attempted to score. East Jefferson tried to get him at home but he slid in safely on a close play, and Pine had a 3-2 advantage.

The Warriors answered in the seventh. Kylan Reese walked to begin. He then advanced to second on a passed ball before scoring on a pair of wild pitches to tie things, 3-3.

But Pine continued to battle.

In the bottom of the frame, the Raiders put a two-out rally together. Connor Holmes, who reached base three times and scored twice, got hit by a pitch for a second time. He stole second and third during Dillon Morris’ at bat.

Morris made the stolen bases pay off. He ended the game by singling to center, allowing Holmes to cruise home with the winning run.

“It was a hanging curveball right down the middle,” Morris said. “I sat back on it, did what I was supposed to, doing what my coaches have taught me, what I’ve been trained, I sat back on it and hit it right back up the middle.”

On the mound, Hunter Cooper was solid, despite having a short amount of sleep.

Friday night, Cooper, a member of Pine’s basketball team, was competing for the Raiders in the bi-district round of the Class 2A state playoffs at North Caddo, about a five-hour, 30 minute drive from Pine. The Raiders lost that game, 75-39.

The baseball game was a 10 a.m. start time at Pearl River, which is about an hour away from Pine.

Cooper got off to a rough start, walking the first two hitters, and the Raiders committed three errors that inning defensively, but they got through it, limiting the damage to just two runs. After that, he was solid. Cooper went the distance, allowing one-earned run on two hits with five strikeouts, three walks and two hit batters.

“This is baseball. You’ve got to give it all you’ve got all of the time,” Cooper said. “The defense out there was next to perfect (just two errors after the first). As good as you can ask for.”

The defense also turned a double play to end the sixth.

Pine coach Blake Dillon said he was proud of the way his club came out and played.

“We struggled the last two days (last Thursday and Friday),” Dillon said. “We couldn’t throw strikes. Hunter gets straight off of the basketball court, and gives us seven strong innings today. I can’t say enough about that kid. Last year, he had a 1.3 ERA. He had some tough losses because we couldn’t hit behind him. We were in this situation a lot last year. That’s what we’ve been working on, hitting and coming through at the end of the game, and playing a full seven-inning game. We’ve been notoriously in the past to play five or six innings and then in the seventh inning, we kind of blow up.”

Dillon said it was a tough start but it says the type of players they’ve got right now.

“They’ll fight through that, work and do everything they’ve got to to claw and get that victory. After last night’s game (Friday, a 13-3 loss to Doyle), we said we were at a turning point of our season after the first two games. Either we were going to go downhill or we had to step it up. We answered the call today. I couldn’t be happier with how we played. We had a few errors (five total) but we did what we needed to do to win the baseball game. That’s what it comes down to. You play as hard as you can the whole seven innings and everything will work out in the end,” Dillon said.

After East Jefferson went up 2-0 in the first, Pine tied the contest with two of its own.

Holmes was hit before Morris walked. Both runners moved up on a wild pitch. Holmes scored on Seth Brown’s RBI groundout and Morris recorded the game-tying run on Knight’s run-scoring single.

It stayed that until the bottom of the sixth when Pine went in front, 3-2, before East Jefferson tied it in the seventh. Pine then won on Morris’ walk-off single.

The Pearl River Tournament was the season opening games for the Raiders.

After beginning the season with an 8-5 loss to the host team Thursday, Pine lost to Doyle, 13-3, in six innings.

The teams combined for 13 errors and 12 unearned runs. Pine had seven miscues while Doyle made six errors.

Pine was limited to just three hits, all singles by Holmes, Knight and Will Polk.

Knight was the losing pitcher.