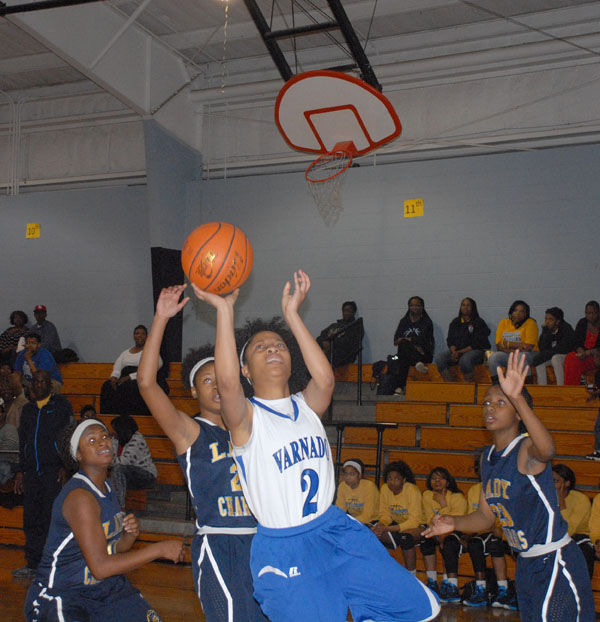 Varnado made a late comeback on Madison Prep but came up short in a 68-65 loss at home Friday in District 6-1A competition.

Varnado trailed, 67-56, at the 1:51 mark of the fourth quarter, and it seemed that Madison Prep had the game in hand.

Varnado had other ideas.

Breanna Holmes, who recorded 18 points, hit a three from the left corner with 1:23 remaining. Then Yienna Kemp, who posted 15, put back a miss after grabbing an offensive rebound with 38 seconds to go.

Ke’arria Green made a steal in the backcourt and hit the layup on the next possession, trimming the deficit to 67-63.

But Varnado wasn’t done. Tarralyn Moses, who scored 18, hit a shot and got fouled. She missed the free-throw attempt, but her bucket had her club within two.

With just four team fouls, Varnado was forced to start fouling to put Madison Prep in the bonus.

VHS reached the seventh team foul with 8.5 seconds left. Sherry Porter, who posted 21, made one of two, but Madison Prep got the rebound and missed the front end.

Varnado, however, was unable to tie the game after making a great comeback late.

“They gave 100 percent effort,” Varnado coach Lubertha Peters said. “I’m proud of them because they played with more control and they did pretty much what they were supposed to do.”

Peters said in the game her club missed too many layups.

Friday’s game was close throughout until it seemed Madison Prep had taken control in the fourth quarter.

The third quarter was close early on until Madison Prep upped its lead to nine, 47-38, with 4:13 remaining in the third.

Varnado then went on a 6-0 run, closing it to three.

Kenisha Kemp, Holmes and Moses all hit field goals during the run to make it 47-44 at the 1:29 mark of the third quarter.

Moses opened the fourth quarter by knocking down a 3-pointer, but Madison Prep pushed the lead to 63-53 at the 2:45 mark.

That advantage was quickly down to eight on the next possession when Holmes was good for two.

Lakedria Franklin, who had eight, hit for two at the 2:30 mark, pushing the margin back to 10.

Varnado trimmed the lead to two with 33.6 seconds left but could get no closer.

Madison Prep improved to 23-7 overall and 7-0 in league play,

Desmanique Gaines posted 20 for Madison Prep while Kennedy Moore had 10.

Nikki Huggins logged four while Yasmin Little and Jasmin Polk put up two each and Faith Avery contributed one.