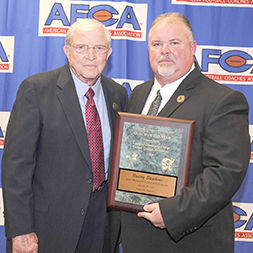 The East Mississippi Community College Lions put another great season together this year.

The Lions captured their second-consecutive NJCAA National Championship, which was their third in the past four years, after downing Iowa Western Community College, 34-17.

“Our philosophy over the last few years has been to just win one game at a time,” EMCC coach Buddy Stephens said. “This past year, the team was different. This team played with a lot of swagger. In the National Championship game, we didn’t have our best game offensively, but the defense stepped up. We had a good offense all season. We averaged about 50 points a game. Defensively, we averaged only giving up only eight points a game.”

EMCC’s defense was strong all season. The unit scored 10 touchdowns. The Lions returned seven interceptions for scores and three fumble recoveries for touchdowns. The special teams also blocked a punt for a score.

During the nine-game regular season, East Mississippi did not allow a rushing touchdown. For the year, the unit gave up eight passing scores and four rushing TDs.

Stephens, whose wife Robyn Douglas Stephens is from Bogalusa, said the key to winning was everybody staying healthy and focused.

“We had just one goal. Simplicity, focus and playing hard are the things we really focus on,” Stephens said.

This was the second time Stephens received the honor, and he is the first two-time recipient of the award.

“It’s voted on by your peers,” Stephens said. “It’s something that we don’t take lightly. We feel it’s an honor to get that award. It’s not an individual award. It’s a staff award. We have a great staff. No one person is going to do anything like that. It takes a staff.”

Since arriving at East Mississippi Community College, which is located in Scooba, Miss., in 2008, the team has had nothing but success.

Prior to Stephens’ arrival, the school, which has had a football program since 1929, had made just one playoff appearance.