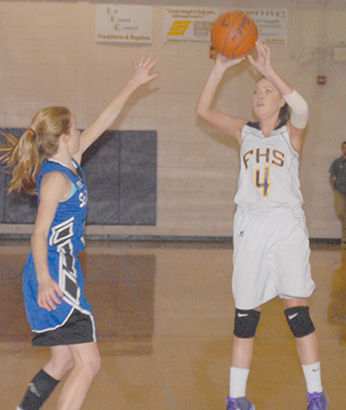 Franklinton’s Lady Demons suffered a 57-50 loss to St. Scholastica Academy despite knocking down 12 threes in a District 8-4A contest held at FHS Friday.

Shelby McDonald led the charge from beyond the arc, knocking down five treys to account for her 15 points.

Crain said some of the things that hurt her team were missed free throws, missed layups and turnovers.

Franklinton converted just five of 13 (38.4 percent) from the free-throw line.

Friday’s contest was a game of runs.

St. Scholastica Academy jumped out to a 12-2 advantage at the 3:17 mark of the first quarter, but the Lady Demons responded with a 6-0 run.

Jada Thompson hit the team’s first 3-pointer with 3:03 left to trim it to seven, and then McDonald was good on a 3-pointer from the top of the key 32 seconds later, making it 12-8 and forcing the Doves to call timeout.

St. Scholastica, which never trailed in the contest, finished the first quarter by scoring the final four points.

The Doves took a 16-8 lead into the second quarter.

The Doves extended their lead back to 10 at 18-8 on the first possession of the second period but Franklinton worked its way back in it with a 9-2 run.

Shaikeria Fabré drove the lane for two. Fabré, who had 11, hit for two more on the next possession, trimming St. Scholastica Academy’s lead to 18-12.

Denetra Rayford knocked down a shot, and the Doves’ advantage was down to just 18-14.

Samantha Zelden, who scored 25 points for St. Scholastica, made two free throws with 4:07 remaining in the first half.

But Chelsea Armand, who recorded 11 points, nailed one of her three treys 20 seconds later, and the Doves lead was down to three at 20-17.

From that point until the end of the first half, St. Scholastica’s lead was between three and six points.

The third-quarter lead got as high as 12, but the Lady Demons trimmed it to 46-41 by the end of the third period.

Zelden opened the fourth-quarter scoring with a bucket with 6:47 on the clock.

Franklinton responded with six straight on threes by McDonald and Fabré.

The Doves responded with five straight.

Zelden grabbed an offensive rebound and hit the followup before Schmidt was good on both ends of a 1-and-1, and then she split free throws. SSA had a 53-47 lead with 3:18 on the clock.

Franklinton got back within three on a McDonald three with 2:31 remaining, but the Lady Demons couldn’t complete the comeback in the loss.

Thompson finished with six points for Franklinton while Tellise Magee had three. Rayford and Hayle Davidson both added two.

The loss put Franklinton’s record at 5-14 overall and 1-4 in district play.

Franklinton is back in action Friday going against Pearl River at home in another District 8-4A competition.

For St. Scholastica, Schmidt put up 16 points while Feringa had seven.