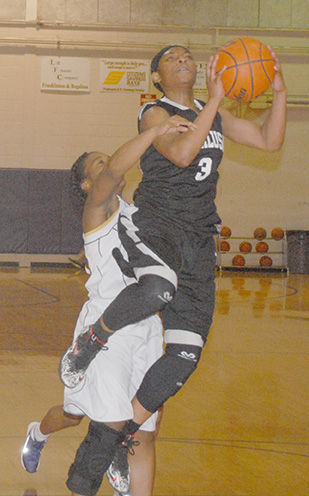 Bogalusa’s JaMaya Mingo-Young had an incredible game, scoring 51 points in a 71-39 victory over District 8-3A opponent Independence on the road Tuesday.

Jasmine May and Dezyriah Rankins both had six points while Shante Chatmon and Amia Peters both had four.

Franklinton’s Shaikeria Fabré put up 20 points, and Chelsea Armand registered 17 in a 51-32 win over Pearl River in a District 8-4A road game Tuesday.

McKenna Rosenthal and Hayle Davidson both posted two, and Denetra Rayford added one.

Pine’s Lady Raiders outscored Northlake Christian School, 10-2, in the third quarter en route to a 37-24 victory on the road in District 8-2A play.

Varnado suffered a 73-43 loss to Madison Prep in District 6-1A play Tuesday on the road.

Varnado was on the losing end of a 61-57 contest in last Friday’s road game.

Franklinton hit 11 3-pointers and was victorious over Pope John Paul II, 96-42, on the road Tuesday.

Tray Anders led the Demons with 22 points and five steals.

Pine suffered a 59-48 loss to Northlake Christian School in a District 8-2A contest at NCS.

Varnado’s Wildcats lost to Madison Prep 104-50 in a District 6-1A road game Tuesday.

Delrick Abrams led the Wildcats with 20 points and D.J. Jefferson had 10.

Ben’s Ford Christian School suffered a 59-41 loss to Silliman Institute in a District 6AA contest held on the road Tuesday.

Destin Pittman and Bryan Johnson were the Eagles’ leading scorers, as each posted eight points.

Mt. Hermon’s Corterio Williams scored 29 points and Jessie Pouncey finished with 23 in a 44-38 victory over Holden at home Friday.