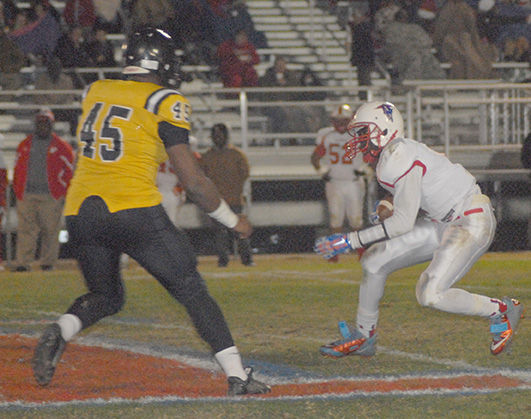 Dillon made it as an athlete.

The Raiders’ defensive first-team player is back Chris Gordon.

This year, Pine captured its first playoff victory with a 28-20 win over St. Helena Central after reaching the postseason as the No. 15 seed.

The Raiders lost in the regional round to second-seeded Kinder, 37-6. Kinder finished as the state runner up, falling to top-seeded Many, 22-15, in the finals.

Arata was the only Jaguars’ player to make the first team, but three of his teammates are second-teamers, including offensive lineman Bobby Delaney, linebacker Steven Schmitt and kick returner Chanse Caire.

The Jaguars finished this season with a 1-9 record. PJP made the Division III playoffs as the No. 14 seed but lost to third-seeded Riverside Academy, 63-7.

St. Thomas and Northlake Christian both made it to the second round of the Division III playoffs.

Northlake Christian, the No. 9 seed, fell to eventual state runner up and top-seeded Catholic of New Iberia, 55-14.

Rounding out the defensive backs are St. Thomas’ Brad Shafer, Springfield’s Milan Love and NCS’ Josh Landry. Love is also a second-team quarterback while Landry is a second-team kicker.

Switching to the specialists, the rest are Springfield kicker Michael Sykes.

Switching to the second-team offense, the rest of the receivers are Northlake Christian’s Zack Odenwald and Springfield’s Zach Jackson.

The rest of the running backs include, St. Helena teammates Dussell Cooper and Sidney Banks. Banks also made the second team at linebacker

Moving to defense, the rest of the linemen are Hannan’s Mitch Morel, Springfield’s Joseph Kirkland, and St. Thomas’ Jesse Hester.

The rest of the linebacking group has Northlake Christian’s Adam Riché, and St. Helena’s Trent Tanner.

Hannan made the Division III playoffs as the No. 11 seed and lost to St. Thomas Aquinas, 32-7, in the opening round.

Springfield was in the Class 2A playoffs as the seventh-seeded team and made it to the quarterfinals before falling to second-seeded Kinder, 42-14.