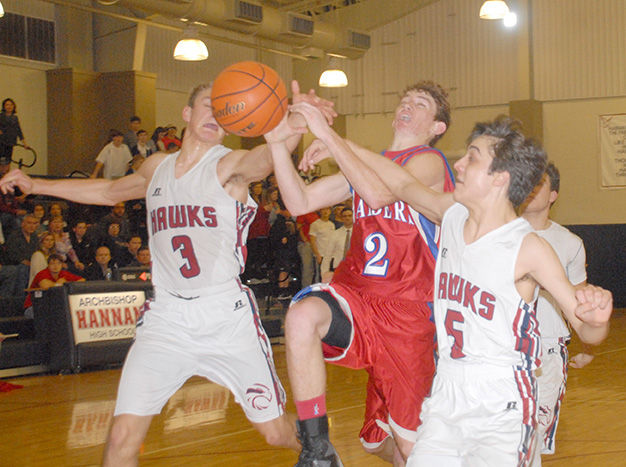 Pine suffered a 35-32 loss to Archbishop Hannan in the Raiders’ District 8-2A opener on the road Friday.

The game was close throughout, as neither team led by more than six at any point.

Hannan held a six-point advantage, 34-28, with 1:58 remaining, but Pine came back with its pressing defense.

Hunter Cooper, who scored 12 points, came up with a steal, but the Raiders missed the ensuing free throws. The Raiders grabbed the offensive rebound and Jordan Phelps was good for two, closing it to 34-30,

Trey Cooper, who also finished with 12, made a steal in the backcourt and hit the layup to make it 34-32 with 41 seconds to go.

Pine missed a shot at the buzzer, as Hannan held on.

Raiders coach Eddie Vaughn said the Pine’s defense down the stretch was outstanding.

“I thought we did some things that were big time for as small as we are,” Vaughn said. “We made them call timeouts. We got our hands on balls. We gave ourself a chance to win, but you’ve got to make free throws (10 for 18, 55.5 percent). Most of that was earlier in the game, and then we’re right there, but I thought Hannan did a fine job to finish it out.”

Just 1:09 into the game, Pine was faced with adversity.

One of the team’s top 3-point shooters, Ty Galloway, suffered a sprained ankle and was unable to return.

“He’s a guy we look to shoot the ball and to score. When you lose him that early, it’s absolutely a devastating loss,” Vaughn said.

Pine jumped out to a 5-0 lead on a 3-pointer by Trey Cooper 51 seconds into the game and a layup from Caleb Voth with 3:59 left.

Hannan responded with four in a row, as Daniel Hollander, who put up 16, scored the four points to make it a 5-4 game with 2:30 remaining.

The Raiders came back with five straight.

Hunter Cooper knocked down a right corner three at the 1:09 mark, and then Jordan Phelps found Trey Cooper for two, and it was 10-4 after the first period.

Pine’s lead was 13-9 with just under six minutes left in the second, but the Hawks scored 10 consecutive points to open up a six-point advantage.

Patrick Bossetta, who had three, was good after an offensive rebound and putback.

Hollander tied the game, 13-13, on a field goal. Murray, who totaled six, gave the Hawks their first lead, 15-13, with a pair of free throws. Noah Griffin, who posted four, added two free throws and hit a jumper. Hannan led, 19-13, with less than a minute remaining.

It stayed a six-point margin at halftime, with Hannan leading, 21-15.

The contest continued to stay close throughout the third. With it tied, 24-24, Hollander was fouled on a 3-point attempt at the buzzer. Hollander went to the line and hit all three free throws, and Hannan led, 27-24, after three.

It was the second time the teams played a close game against each other.

The teams competed in the Hannan Hustle title game with the Hawks winning, 50-49, in late December.

Voth and Phelps scored three each for Pine while Jamie Adcox added two.