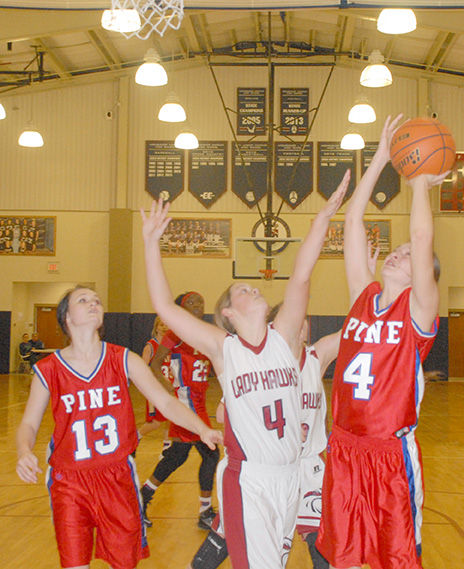 Despite never trailing Friday against host Archbishop Hannan, Pine’s bid for a league opening win was in doubt until the end. The Lady Raiders won, 51-45.

One of the keys to Pine beginning District 8-2A play with a victory was its ability to get on the offensive glass. The Lady Raiders did a great job of getting offensive rebounds and turning those into second-chance points.

“It was very important,” said Ny Ny Robertson, who scored 12 points. “It looked like we couldn’t get any offense running down there. We had to get strong down there and get the rebounds.”

“Laken (Breedlove), Ny (Robertson), Kaylee (Turnage) and Bre (Brown), I thought they really went after the ball on the boards and created some real havoc,” Vaughn said. “We had a lot of really nice putbacks, and we had some balls that were challenged, and we just didn’t put them down, which seems to be another curse of us like our free throwing (8-for-20). At the same time, if you keep pounding that board and scoring points, you’re going to give yourself a chance to win, and that’s what we did.”

Morgan Thomas hit Breyanna Brown for the game’s first points. Then Kaylee Turnage came up with a steal and found Brown for two more to make it a 4-0 game in the first minute.

Both teams had trouble scoring, but Hannan got on the board at the 3:38 mark when Rachael LePere, who put up 11, hit a pair of technical foul free throws, cutting Pine’s lead to 4-2.

Thomas then knocked down a 3-pointer, and it was a 7-2 lead for the Lady Raiders.

Hannan trimmed it to 7-4 on Kennedy Martin’s jumper with 2:28 remaining.Pine closed the period on a 7-2 run and began the second with six straight.

Turnage, who posted five, drove in for a layup before Brown split from the line.

Robertson was fouled after the Lady Raiders grabbed several offensive boards and hit one of two at the free-throw line.

Miranda Kramer, who logged four points for Hannan made a layup on a fast break, bringing the Lady Hawks closer at 11-6.

Pine missed two free throws with 28.1 seconds left but Robertson came down with an offensive rebound. She hit the first but missed the second. Brown got the offensive board and hit the follow up shot and Pine led, 14-6 after the opening period.

Pine began the second quarter with possession and missed the front end of a 1-and-1. Brown, who posted a game-high 22 points, got the rebound and putback to give the Lady Raiders a double-digit lead.

Then Brown hit Robertson with a long pass for two at the 7:17 mark. Brown came up with a steal and hit the layup on the next possession, making it a 20-6 lead, and forcing Hannan to call timeout.

Martin, who led the Lady Hawks with 21, split a pair of technical foul free throws with 1:12 on the clock.

Reilly Roberts, who had five, knocked down a pair of free throws before Martin was good for two after an offensive rebound.

The Lady Raiders continued to hold the lead throughout the third quarter. Hannan outscored Pine 13-9 in the period and it was a six-point game after three.

Hannan continued to fight back. The Lady Hawks scored four in a row. Kramer grabbed a defensive rebound and took it the rest of the court for two at the 2:01 mark.

LePere was good on a jumper with 57 seconds to go and it was 48-45, but Hannan was unable to get any closer, as Pine posted the game’s last three points in the 51-45 victory.

Breedlove tallied eight points for the Lady Raiders while Thomas had three and Chelsey Turnage added one.

Both teams continued league play yesterday. Pine was on the road against Northlake Christian School while Hannan hosted Mt. Hermon.