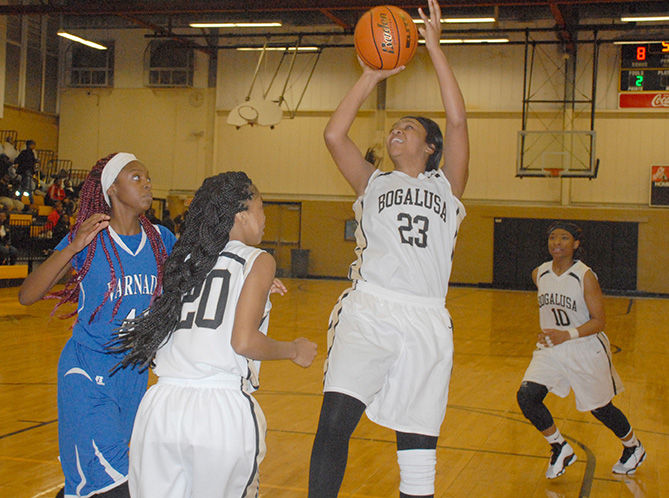 Bogalusa jumped out to a 15-point halftime-lead and then withstood a fourth-quarter Varnado run in a 72-61 victory at home Tuesday.

One of the things that hurt Varnado was free-throw shooting. VHS was eight for 22 (36.3 percent) from the line in the first half.

Varnado turned things around in the second half, going 15 of 19 (78.9), which helped the team get back in the game.

Bogalusa continued to lead by 12 at 60-48 at the five-minute mark, but Varnado made its push.

VHS put up six straight over the next 1:25 to draw closer.

Tarralyn Moses, who scored 26 points, began the run by knocking down three free throws after being fouled on a 3-pointer. Yienna Kemp, who recorded 20, grabbed a pair of offensive rebounds and was fouled. She split the free throws to make it 60-52 at the 4:07 mark.

Moses hit a fastbreak layup with 3:35 remaining, forcing Bogalusa to call timeout, with the lead down to 60-54.

Out of the timeout, D’Sha Rankins, who posted 13, hit 1-of-2 free throws, and it was a three-possession game.

Kemp responded with a bucket, and the advantage was down to five.

Bogalusa then put the game away by scoring the next nine points.

Nylijah Mingo, who finished with 14, was good for two. JaMaya Mingo-Young, who delivered 26 points, hit the front end of a one-and-one. Rankins pulled down an offensive rebound and hit for two. Bogalusa was ahead, 66-56, and the clock showed 1:58.

Mingo-Young put up two more 30 seconds later. She was hurt after the play, but coach Kim Carriere said it was cramp, so she is not going to miss any time.

“It was a team effort,” coach Carriere said. “We had all of our players here tonight, so we were able to sub and keep our starters fresh. I think that was a difference-maker in the game.”

“She turned it on,” Carriere said. “She was in attack mode. You could tell by the way she was playing defense. At times, she was out of position, but she was attacking like a bulldog. She wanted to get the ball, and she wanted to score. It was a game that they really really wanted to win.”

Varnado coach Lubertha Peters said that had her team played up to its ability, it would’ve been a better ball game.

“I’m not going to say we would’ve won, but it would’ve been a better ball game,” Peters said.

Bogalusa’s Jasmine May finished with eight and Kiera Walker had five.

Varnado’s Breanna Holmes and Ke’arria Green put up six each.