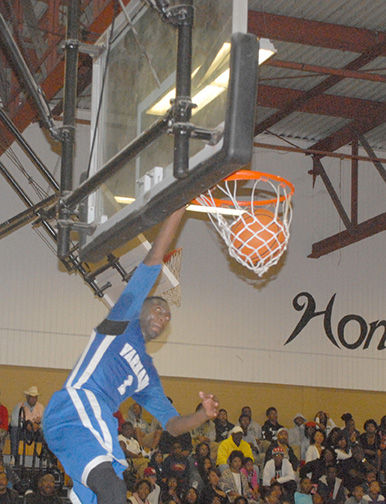 When one of your top players goes down, others need to step, and that happened for Varnado Tuesday in the Wildcats’ 74-66 victory over Bogalusa at BHS.

Bogalusa led 20-15 at the 7:28 mark of the second period when one of Varnado’s top players, D.J. Jefferson, who was named the Dexter Christmas Tournament Most Valuable Player last week, was suffered a knee injury. He was carried off of the court and did not return.

Since Varnado’s next game isn’t until Jan. 20, coach Brad Oestriecher said he doesn’t expect Jefferson to miss any game action.

With Jefferson out, that meant other guys had to step up, and they did.

“D.J. is a great player for us and our leading scorer, but we have other guys that can play ball too,” Oestriecher said. “Two juniors, Nick (Darden) and Slim (Delrick Abrams), they stepped up big. We had a freshman, J.J. (James Williams), give us solid minutes, and Andre (Jones) gave us great minutes. Overall, it was a great team effort and probably one of the best wins I’ve had since I’ve been here at Varnado.”

After Jefferson’s injury, Varnado outscored Bogalusa 20-15 down the stretch of the first half and had the game knotted, 35-35, by halftime.

“We knew we had to play without D.J., so we just played our hardest,” Abrams said. “We came out and we won the game.”

The third quarter featured a pair of runs.

The first was by Varnado. Abrams broke a 37-37 tie with one of his four dunks sparking an 8-0 run.

Then it was Bogalusa’s turn to make a run. The Lumberjacks came back with nine unanswered to go in front.

DeSean Crumedy split from the line with 4:37 to go before Kenyatta Scott, who led BHS with 24 points, knocked down a three. Tremarcus Levi was good on a field goal and then Scott put his club in front with a trey. Bogalusa led 46-45, as the clock showed 3:11.

Abrams put the Wildcats back in front 20-seconds later after putting back a miss after an offensive rebound. Nick Darden found Damon Kirsch to make it, 49-46.

Varnado had the lead to 53-47 but Bogalusa scored the quarter’s final four points and trailed by just two, heading to the fourth.

Abrams hit for two and then he came up with a dunk, extending the margin to 59-55. Jones was good for two more, forcing Bogalusa to call timeout with 5:15 left and the Wildcats ahead, 61-54.

Varnado’s lead was never below five after the run, and the Wildcats went on for the 74-66 victory.

Lumberjacks coach Stradford Goins said his team really struggled with the inside game with getting their point guards to be aware of the open man, making some big man moves offensively and getting in front of the ball.

“It was just some fundamentals we weren’t aware of at first,” Goins said. “I don’t know if it was the pressure of wanting to please the crowd or what it was. Nothing to take away from Varnado, No. 1 (Abrams) played good defense. We just couldn’t connect with our point guards and our big men.”